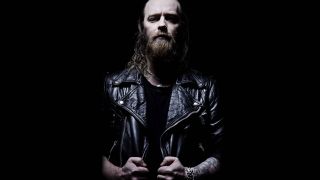 Nearly 30 years into their career, Sweden's Katatonia are one of metal's most unusual bands; seamlessly blending subtlety with brute force and serenity with pitch black despair. On new album City Burials, that sonic brew makes for an intoxicating listening experience.

It also suggests founders vocalist Jonas Renske and guitarist Anders Nyström are continuing to absorb influences far beyond the death and doom metal they began with in 1991.

"I think especially Jonas is way more open minded these days compared to the past," explains Anders Nyström from his home city of Stockholm. "So we probably cross our tastes more easily now. At least objectively for what’s best filtered for Katatonia."

The mission statement that has fuelled Katatonia's fascinating evolution is more complex though.

"I think our signum has always been about trying to be as creative as possible with mainly dark and negative subjects that people normally avoid and do not want to touch," continues Anders.

"Musically and lyrically, we try to indulge in it, create something with it and turn it into something beautiful. I think we achieve that buy highlighting parts that will send signals to your sentimental and nostalgic emotions.

"These days we do our best to not fall down the trap of clichés and pretensions, but devote and commit ourselves to a more cryptic and low-key message, that might not be so apparent, but it could still pierce your heart."

There's no denying the melancholy of Katatonia's music, but they offer a far deeper emotional well than most of their peers. "Having embraced mostly sorrow and death, love and hope are also very important counterparts in our lyrics and themes," says Anders, "because if you don't use the grayscale you will not fully appreciate where things go dark or bright."

Things went dark for the band is a different way in the period preceding the recording of City Burials; Katatonia stepped away with a hiatus in 2018 after several years of more intense touring.  With fans and band unsure of how long it would last, their return happened in an unlikely way.

"Well, to tell you the truth, City Burials was originally supposed to become Jonas solo album," reveals Anders, "which he was working on together with Anders Eriksson (aka frequent collaborator Frank Default) on guest keyboards in the meantime of the Katatonia hiatus.

"However, he changed his mind at the very last stage, just before hitting the studio with other musicians implying he rather wanted it to become a Katatonia album. I listened to all the songs he had written and the Katatonia connection was already there in most of the material, so after some re-arrangements and touch ups, we hit the studio and co-produced it just like we normally do."

The age-old cliche accusation when metal bands change (and Katatonia are now a progressive rock band to all intents) is to say they've gone soft or sold out. That certainly can't be levelled at Jonas and Anders, who are still enthusiastically scratching any death metal itch they have in their other band together; Bloodbath.

The death metal outfit was originally formed with Jonas on bass, Dan Swanö (Edge Of Sanity, Nightingale, Witherscape) on drums and Opeth chief and old friend Mikael Åkerfeldt (who also provided guest vocals on Katatonia's second album Brave Murder Day), but after a few lineup changes over the years, now features Nick Holmes of Paradise Lost on the mic (more on them later).

"I guess the yin and yang concept of having two active bands that represent something completely different, has sustained a perfect balance and healthy dose of motivation," reflects Anders.

"Bloodbath serves as an outlet for aggression and a tool for some kind of entertainment that Katatonia can’t offer me. Obviously, this goes vice versa where Bloodbath can never substitute and fulfil my substantial needs in Katatonia, so having both bands active on their own terms, creates an equilibrium between tension and release."

"After saving up some of my pocket money, this was the first album I went out to purchase on my own in a local electronic store that also housed a LP department.

"I was extremely excited as it had been Mötley's image who first caught my interest. Apart from other glam bands that only used tons of make-up and looking all girlie, Mötley Crue initially appeared with pentagrams, swords, leather, chains, spikes, blood and fire.

"They looked both sweet and pretty yet also cool and dangerous at the same time, just as their music turned out to be!"

"Probably the album that ranks the highest number of plays of all time on both my walkman and home stereo. The guitar duo Downing and Tipton convinced me I wanted to be a guitar player just like them.

"I was in awe under Halford’s command. Judas Priest became my idols! If there can be one album to crown heavy metal and define that imagery, it would be this one.

"Oh and there’s an overlooked ballad, a real jewel, near the end of the album that we had the honour to cover a few years ago."

"Listening so frequently and exclusively to heavy metal for a number of years kinda made it easier to tap into appreciation for this album. This was a lot more harder and much more 'metal' than anything else, but it also held a melodic musicality in the geniuses of Burton and Hetfield.

All doors to the world of thrash metal had opened and not long after I started exploring and smearing my fingers on every sleeve that was tagged "thrash" or "speed" at the record stores down town.

"The definite party album from the glory days of the 80's. The opening  ”cokk-rokk" anthem "Still Of The Night" has become somewhat of a ritual and I ended up getting the words tattooed on my forearm.

"John Sykes perfect combination of ripping yet emotional solos gives Les Paul THE face on this one. Nobody can miss he got the wildest vibratos in the world and of course, there is and can be only one Mr Coverdale. Over here baby!"

"This would be the most personal and important album in my collection. When my outlook on life has been too bleak, it has helped me go though those dark times, so it's not an album I put on very often for its musical quality, but only in my time of need.

"I'm at loss for words for some of the feelings this album invokes in me. I've contemplated that music from this album might come to accompany my funeral."

"Enormous influence on my songwriting. This album goes beyond the average clichés you might think of when it comes to the gothic scene. It holds so much passion and I believe the essence to be nothing but soothing, dark, mystical rock. Great cinematic image too."

"I could easily pick one of the earlier albums as a bigger classic, but when it comes to favorites this album had the biggest impact on me at the times when we were starting Katatonia.

"It was different and nobody was doing the pagan/ viking concept having this kind of pondering savage sound. The whole album is very unique with a credible atmosphere. A huge influence on my teenage self strumming away riffs on the guitar."

"This album slammed death metal totally off its course onto a detour into doom metal land which gave birth to a new subgenre - gothic metal.

"I believe the first time I heard this album it brought tears to my eyes. Without it, Katatonia would not have sounded like we did in the '90s. Hell, maybe we wouldn't even exist today!"

"The best progressive and classical black metal album still to date. Nothing else holds such an atmosphere of majestic darkness.

"The whole symphonic and bombastic orchestral thing meeting with raw and evil black metal is a match made in hell from another galaxy."

"Although I view Altars Of Madness as THE classic album of theirs, this one is on the other hand the best death metal album ever released by anyone.

"It’s not only Morbid Angel's, but the entire death metal genre at its absolute peak and perhaps the end of the first wave. Obviously it also goes without saying, no Morbid Angel, no Bloodbath."

Katatonia's new album City Burials is out now via Peaceville Records. To order and for more info visit katatonia.com