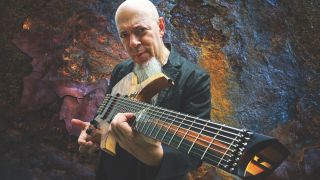 “I’m always creating... that’s just my life,” says Dream Theater keyboard legend Jordan Rudess who, along with releasing the prog titans’ 14th studio album in February, has also been putting finishing touches to latest solo effort, Wired For Madness. You could say he’s had his hands full over the last year or two.

“If I’m not working on music, it will be some sort of digital thing,” he continues, of the apps and online resources he’s created to aid musicians the world over. “That’s just what I love to do and what interests me. That’s where my passion lies… I don’t even know how to stop the machine. I don’t want to! It’s just natural for me to create.”

Here, the Dream Theater/Liquid Tension Experiment legend gives MusicRadar an insight into his latest ventures - not least exploring eight-string guitar - as well as reflecting on his 20th anniversary with the prog-metal pioneers on fan favourite Metropolis Pt. 2: Scenes From A Memory...

Many Dream Theater fans were thrilled to see the Metropolis... anniversary shows announced. It must have been even more thrilling for you, personally...

“That was my first album with Dream Theater, now 20 years ago, so this tour we’re doing is not only the anniversary of that album but my joining… that feels very special and cool.

“For a lot of people, that’s their favourite Dream Theater album. It’s a great time for this band, the new album has been greatly received - it’s a nice return to the harder core sound, especially after going in another creative direction on The Astonishing. As we all know, that was a little polarizing because not every fan could understand or relate to it. I think we confused our metal fans a bit with that album; they weren’t used to all this sensitive loveliness, haha!

“It was emotionally different. We got that out of our system and then on this album, it was very much about going back to energizing the band again. We’re doing some festival stuff in the UK; I don’t know about ‘evening with’ shows yet, but it will of course happen!”

Your new album Wired For Madness arrives only two months after Dream Theater’s Distance Over Time. How hard was it working on two records simultaneously?

“This album was a long time coming because I get so busy doing all my other important things. I had to find a nice window of opportunity to do this, because it’s such a big project. My last album was a piano album, which was very special to me but easier to pull off. There weren’t too many guests; it was very clear and simple.

“This one, however, was a huge project - working away in a studio with my sonic tools to create the different colours, layers and orchestration. Then there’s the whole production side of it, too… you finish doing the music, then there’s so much beyond that - graphics, marketing, promotion, it’s so deep. You need a bit of a break before you revamp again for another project of this size!”

You’re also playing guitar on this album... which might surprise people!

“I know, what the hell, right?! I’ve always played the guitar, though nowhere near as extensively as I have played the keyboards.

“I met this wonderful luthier called Przemek Drużkowski, who builds great guitars. He felt inspired to build me a custom guitar and I expressed an interest in an eight-string called The Wizard. It was awesome, so I had to learn how to play it. That was right around the time of Wired For Madness, so it ended up on some tracks there as well.

“It’s a lot to get your fingers around; the first time felt a bit like, ‘Whoooa!’ To go from not practising the guitar much at all to trying an eight-string was definitely intense. It took a while to wrap my head around.

“The first thing I did was tune down the low F# to an E, so when I played barre chords it was really extended, with bass notes basically, and that’s been really fun! With my signal chain, I didn’t go John Petrucci crazy - I was experimenting with the Line 6 Helix and just ran that into Logic directly, turning all the knobs and dials in there.”

It also must help being in a band with someone as brilliantly talented as John Petrucci...

“It’s one of the blessings in my life that I’ve been able to work with such amazing musicians, who are also very nice people as well. My partnership with John goes back a long way; we started working together in Liquid Tension Experiment.

“There have been so many years of playing unison lines, harmonies and writing together - it’s been a really mutual thing. We enjoy and learn from each other. I have certain strengths he doesn’t have and it works the other way round too, so we push each other.

“I might come up with something and he’ll be like, ‘What the hell is that?!’ There’s a reason for that: the keyboard is different to a fretboard. And he’ll play something and I end up wondering how the hell he thought of that, these sequences of notes that wouldn’t be natural on a keyboard. He might tell me it’s a simple pattern that he’s repeating and I’ll say, ‘Well, it’s no pattern on the keyboard!’

“It can often be something bizarre. He comes up with these patterns because he’s very smart and thinks like that, patterns and shapes. Of course that’s just how guitar players think… but he’s the master at it.”

And you probably think more in terms of intervals?

“Meanwhile, in my world, I’m thinking in terms of pitches. The keyboard isn’t about shapes; because it’s different keys, it’s not the same shape. So I think about the notes; he might think about the fretboard and together we push to do different things. It’s been inspiring to work together like that.

“The same goes with the other guys in the band, like working with Mike Mangini on drums, he’ll be playing 17 using his feet while whistling Dixie and tapping 4/4 on his hi-hat. It’s definitely… intense. It’s great, being surrounded by people who can do things you can’t necessarily do. There’s a mutual respect to the learning process.”

Along with John Petrucci, are some other massive guitar legends playing on your album. Guthrie Govan, Vinnie Moore, Joe Bonamassa are all world-beating musicians...

“John Petrucci plays on the title track. I’m a big fan of The Aristocrats and Marco Minnemann is on this album, too. I love Guthrie’s playing; he’s a really nice guy and he played on my orchestral Explorations album as well. Whenever he’s available to do something, he’s pretty much up there with my first choices.

“Vinnie Moore is on there, he’s an incredible player. Joe Bonamassa is on the album, too; I have this proggy blues track called Just Can’t Win, so he was kind enough to offer his abilities to that track - which also has a full brass ensemble. He’s a very tasteful player, so I’m very happy with the guests on this album.

“James [LaBrie, Dream Theater vocalist] did some singing on it as well, at the end of the title track with this epic vocal thing. I have the singer from a prog Russian group iamthemorning, Marjana Semkina, she has this amazing voice that reminds me of Annie Haslam from Renaissance.”

What tips can you offer someone hoping to apply their skills on string instruments to ebony and ivory?

“The biggest obstacle I’d say is getting out of that idea that one shape will be the same in every key. That’s the problem. You will need to know the theory behind things, the half-steps and whole-steps scales are made of.

“It’s more physical in that every scale and key will have different fingerings… there are definitely some that are the same, like the C Major scale and D major have basically the same fingerings, but you might have a different mixture of black notes and white notes. It’s takes a while to retranslate that knowledge to something laid out in a different way.

“It’s worth trying my instrument app GeoShred. It’s laid out like a guitar; there are rows which you could think of like strings with what looks like frets. You can play it keyboard style but in a guitar layout. That’s a good transition to go from guitar to keyboards.”

Dream Theater might not be the best band to start on for beginners, though...

“Obviously, the Dream Theater catalogue is pretty challenging in general… although there are a few ballads, like Vacant, which could be good for those who aren’t advanced players to look at and get their heads around.

“I also have an online school at JROC.US with hundreds of exercises for every level. That’s a great place to go to for videos, tips, notation, MIDI files, just a whole lot of information.

“Anyone looking to learn the piano should find someone to sit down with them. It’s such physical instrument; you don’t want to learn it wrong and end up with tendonitis or anything like that. Don’t play games with that kind of stuff - it can really ruin the fun.

“There’s a lot on YouTube these days, slowing stuff down and learning it, but the problem is there is no one watching what you are doing - how your wrists move or if you tense up; you need some instruction to learn the instrument effectively without injury.

“With the apps, I wanted to create things on devices we all have in our pockets that can change how we think about music and help add expressive ideas into our lives. I also want people who wouldn’t normally make music to get into creating.

“GeoShred can be played like an intense musical instrument, but also has features that only call up the right notes of a scale. You could go in C blues and all the notes are right; you can’t go wrong. So people who normally would just listen can start playing themselves. Anyone with the slightest bit of musical intuition can do it right away!”

You’ve pointed out that Wired For Madess is not a concept album, but there is a backstory about a human transforming into a robot...

“It’s a fun story… I realised this music was going in some interesting directions, so I made this story up in my head. Luckily enough, my friend Peter Orullian, who worked with John on The Astonishing story, is writing a book about this. He’s doing that right now, running with the story for those that are interested in digging deeper. It should be out a few months after the album!”

Wired For Madness is out on 19 April via Music Theories Recordings / Mascot Label Group.