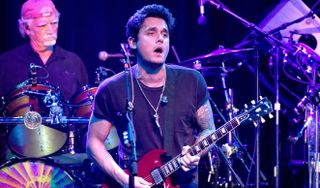 John Mayer has understandably been very vocal about his love for the Silver Sky, the PRS signature model he developed with the Maryland company that was a major talking point upon its release last year. But he doesn't use that guitar in his live work playing the music of The Grateful Dead with Bob Weir in Dead And Company. And his time spent with one of Jerry Garcia's guitars has had a profound effect on him.

Mayer played Garcia's Wolf live in New York earlier this year (watch the video below to see it in action), a nerve-wracking experience in itself when you consider it sold for $1.9 million at auction in 2017.

The custom guitar, built by luthier Doug Irwin, was the late Grateful Dead leader's go-to for over two decades. And Mayer was in awe of it in his recent appearance on Dean Delray's Let There Be Talk podcast.

"Here's what changed me forever: the tone of this guitar was so good," Mayer enthused, "it's the one that's married to those songs. You don't even know if an EMI console sounds good or not; The Beatles recorded on it, it sounded good.

"And all of a sudden, all I have to do is go 'bomp-bap-bomp-bap,' single notes, and I'm in heaven. And I realize, 'You got to get a guitar where the single notes make you happy.' You don't have to play that much at all."

Mayer uses PRS Super Eagle II models as his main electrics on Dead & Company tours, but beyond gear, the experience of playing Garcia's music has left a huge impression on him, as he explained to Dean Delray…

"The only question that continues to elude me is, 'How was Jerry Garcia able to play that much guitar for throngs of people who didn't play guitar and have them join in for every second of that ride?'

"Well, a big part of that is that he wasn't playing in a muscular way. I think he looked at it like a pedal steel. Because he played pedal steel, he was looking to get an electric guitar to be like a pedal-steel, and he was playing it with a certain pressure.

"…Jerry Garcia played the guitar in this lighter way. It wasn't fiery, it was beautiful, it was bird-like; like birds are playing the guitar, and that has something to do wanting to hear it all the time because it's not adrenalized, it's a great way to look at it. I had to look it, like, 'Oh, a lot of these tones are quite pure, they're not in-between two pickups.'

"It's the way he played the guitar. If you're a good guitar player, you don't even need a good sounding guitar, you'll find the one millimeter on the string over the pickup."