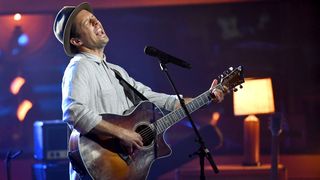 Jason Mraz understands the value of balance in life.

The San Diego-based singer-songwriter divides his time between the stage, the studio and his farm, with the growing of haas avocados offering some much needed perspective from planet fame and its attendant pressures. That offers him a freshness, a clear headspace in which his songs can come together in their own time.

His latest studio album, Know, released on 10 August, finds him on familiar terrain. It's a collection of songs that position Mraz on the side of his audience; it’s where he has always been, ever since stabbing westwards and workshopping his songcraft in the San Diego coffeeshop scene at the turn of the millennium.

It was there, with just his acoustic and his voice, that he learned to synthesise his own experiences into relatable themes that translate in the format of a three-minute pop song. He has a backing band now, but his sound is still primarily his voice, his signature Taylor acoustic, and his enduring sense of optimism.

Sure, there’s a bittersweet quality to Where The Night Takes Us, seeming as it does to mark the passing of those times where you could head off into the sunset without commitments pulling you back (ie, when you are young), but it was written as a feel-good reminder that such possibilities remain, and always will remain, if only as a state of mind.

Likewise, Might As Well Dance, a folksy blue-collar boogie that calls to mind the aunts and uncles kicking off their shoes after a dinner party and too much wine; Mraz is reminding his audience that fun is its own spiritual reward. And for him, so too is writing, but especially performing, as his role on the Broadway show Waitress reminded him, which brings us to his first lesson for all you songwriters out there...

1. Take the opportunity to perform wherever, whenever you can

“I felt Broadway was a vacation for me. That came at the end of 2017, and after spending more than a year and a half purposefully trying to write this record and not really getting anywhere – at least I was getting somewhere but I still had no idea what the album was going to be.

“When the invitation to go and do Broadway came up I said, 'This is great. I’m just going to close my book for a second, move cities, detach myself from the work that I am so attached to, and just be a paid performer for a while.' And it was great, because a hit is a hit; that dopamine hit, that drug hit that you get from playing music, that spiritual lift you get, whether I’m in a coffee shop or the Royal Albert Hall or the Broadway stage, the audience is listening, and there’s no greater way to love somebody than to listen to them. And so when they are listening and you are given the chance to sing, you just feel so loved and that to me was such a high.

“It was a paid vacation, absolutely. I had eight shows a week to just show up and be an instrument, for comedy and music, emotion. And that’s why I became a songwriter in the first place, because I wanted to just be a vehicle for song and my joy.”

2. Playing other instruments can unlock the door

“I’ll play anything. Again, I became a writer and a player because I needed to support my singing obsession, and so the very first time someone handed me a guitar, and said, ‘Hey, press these two. Now, strum.’ And I heard that chord... I immediately wanted to sing to it and write over it, and harmonise with it, and create something, and that has never changed.

“If I sit down at an organ I might try to figure something out that I know already but the odds are I’m going to want to create something brand-new. I try to find a voicing that moves me, that awakens me, and then I’ll just dive in – so the piano’s a good help. Anything with a keyboard is helpful, because I’ll land on a voicing that’s outside of my guitar habits, and then maybe I’ll take them back to the guitar and try to find those voicings, and now I’m in a completely new place with the guitar.

“It’s really like throwing darts. When I pick up an instrument I’m like, ‘What am I gonna land on that’s going to inspire me to go somewhere?’ I’m always trying to break my habits, but I don’t do a very good job at it; most of my songs have the same intervals, or the same chord clusters, and I’m just switching around the order of them.”

3. Trust your gut but learn to take advice

“I think people should be coached to find their own sound. I think doing it on acoustic instruments is a great place to start because if you try to find your own sounds using samples and applications and technologies that you can buy over the counter, your sound is going to sound already like those toys, whereas if you can find a sound on the piano or an acoustic guitar or drums, the odds are your voice will become the lead instrument to that, and that’s the best place to start.

“Supposing you’re not a singer and you still want to find your voice through an instrument, I still think less is more, and if you can figure out how to lose yourself and entertain someone else at the same time then you’ve found a voice. But if you’re completely consumed with yourself then the voice is not 100 per cent pure.

“You’re still trying to emulate something, and I emulated my heroes for a very long time, and I would occasionally have a girlfriend who would say, ‘Sing like you. Be like you.’ And that was a helpful place to start. I also had a coach-like manager, and great A&R through the years who have always said, ‘You can do better than that.’ Or, ‘Yeah, I can see what you’re trying to do there and that’s good but it’s kind of already been done – what else do you have?’ It was always that ask again to solve the problem.”

4. The audience will let you know if your song is working… And your band will make it come alive

“We’ve been playing Might As Well Dance live for years. Even though there isn’t a recording, by the second chorus people know the song, and they’re dancing, and they’re singing along, and they’re laughing. It’s a really great feeling to have a song like that. Most people thought it was a cover, which is a true honour.

“I’ve had the other experience where you play a song and it takes weeks and still people are like, ‘Huh? Okay.’ They’re not really getting it, and it’s... deflating!

“Might As Well Dance is my favourite track on the record. I wrote that song while in Nashville. I went to do the Writers Round in February 2016 and learned a lot, but I would come home at night and continue to write, and this was a song that I actually wrote and recorded then.

“My wife and I, we’ll make little recordings for each other and send them to each other; that way we can listen whenever we want... Like the voice memo on the smartphone. That way, you don’t have to call the person, you just send it. My wife is like, ‘Hi, I’m just driving to the grocery store.’ She gives me an update. On mine, I write songs for her, and I send them to her.

“Might As Well Dance was actually written very slowly, and it was a slow, aching song, but after about a month I went back and listened to it and thought, ‘Y’know, this could actually be a Texas two-step or something; this could jam, like maybe a Grateful Dead tune.

“I was all over the place with it, but I knew it could be up-tempo, so I made this little country-swinging demo to it in the fall, 2015, and when we got into the studio this year, I’d been playing with my band for a couple of years, and my drummer, who’s sort of one of the surviving members of the band, and they’re now called the Weight Band, he had that feel to take it almost like country-funk, country-disco, or western-disco or something. I mean, that band has really made that song sing.”

5. Stage fright is beatable and you’ve just got to push through it

“I would just try to sing my way out of [stage fright]. I felt that I just had a superpower in my singing that I could eventually win an audience over somehow, and especially if my guitar playing was coming up short, I could overcompensate with singing, and that’s how I started, and still it’s how I’ll get around certain awkward moments – especially if I’m playing a song by myself and it’s just me and my guitar.

“I still make sure I fill up the show with story and sound, so instead of a solo I might just keep the rhythm going and vamp, and tell a story. Or I’ll scat, or tell a story, or improvise with what is happening in the room – some version of overcompensating for what could be an awkward moment or a fearful moment.

“But what gave me confidence in the first place with guitar, and I don’t remember where I heard this – I don’t know if I read it or I heard someone say it in an interview – but I was probably 18, 19, and someone explained to me that the guitar on the left hand, if you’re a right-handed person I guess, when you are playing the chords just think of it as your piano chords; just think of what your shapes are and how they can be repeated around the fretboard, but then think of your right hand as playing the drum. Because that’s essentially what you have; you have a drum here.