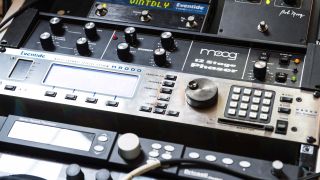 Although rack equipment isn’t as widespread as it once was for casual musicians and smaller bands, popular amp modelling units such as the Axe-Fx and Kemper have kept the rack alive.

On the used market, it's possible for the average player to pick up previously high-end gear for use live, or more likely, in a home studio, which makes the prospect of putting one together well worth investigating.

If you've not run a rack before, you might have some questions about how exactly it all works, so here, we’ve outlined how to take your first steps in building one.

In terms of position in your signal chain, most people run rack units either in the effects loop of their amp, or after it. While stompbox users often place pedals before the amp, that’s a lot less common with rack gear.

You'll probably want a couple of utility units; luckily, both usually are 1U in size, so don't take up much space.

The first of these is a power strip. Samson and Furman make the two most commonly seen units, which offer IEC outputs on the back so you can hook in all of your rack units to one portable power strip.

A rack power strip will also filter some noise from the supply and offer surge protection, but features differ between units. Crucially, it's worth noting that cheaper units are not isolated on a per-output basis, so it's still possible to inadvertently create a ground loop.

The second is a rack mixer. This will allow you to consolidate multiple inputs down into one balanced stereo output. Most mixers also have a headphone out, so they can be used for monitoring, or silent playing if you're not routing the outputs to a desk or DAW.

At the budget end, both Behringer and Samson make units that can be had either new or used for the price of your average Boss pedal.

In addition to these, a passive splitter and phase-inverting box like the cheap-and-cheerful Millenium SP31 will allow you to split your guitar signal and keep a dry path running parallel into your rack mixer, as well as debug phase issues.

For the most basic setup in the home studio, using the rack mixer to mute your wet path will do for tracking guitars, but if you're going to take your rack out and play live, then you have two main options.

First, and most simply, you can run your rack in the effects loop of an amplifier that has the ability to bypass its effect loop. This, however, will mean all of your effects coming out of your signal en masse, so more granular control isn't available.

Second, and more commonly for those that use several rack units, is to use a MIDI footboard to switch between patches and settings on the units, and indeed to switch them between in-path and bypassed.

Because of these constraints, in general most rack users who aren't in stadium bands will probably end up confining the equipment to the studio, where it can be employed for recording without the tasks of switching in and out.