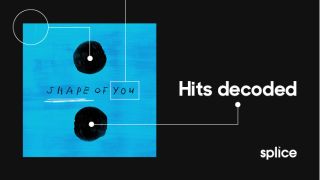 Ed Sheeran’s Shape of You debuted at number 1 on the Billboard Hot 100 chart, getting over 20 million streams in its first week week and giving the singer his first number 1 hit in the US. So, how did Sheeran make it to the top spot? In this article, we break down what made this track an instant chart-topper.

Slower tempos and minor keys have been a trend in chart-topping songs for the past year, and Sheeran put this winning formula to use in Shape of You.

Eight of the 12 songs that reached number 1 on the Billboard charts last year - from Drake’s One Dance to Rihanna’s Work - had tempos slower than 104bpm. At 96bpm, Shape of You proves that the shift to slower tempos is still trendy.

2. A dose of dancehall

If Shape of You makes you want to dance - and we know that it does - it’s because of that beat. And that beat probably sounds familiar. It comes from dancehall, a genre of Jamaican pop music from the 1970s, but it’s been having a heyday on the international stage thanks to modern pop producers. Sia’s Cheap Thrills, Drake’s One Dance, Justin Bieber’s Sorry and, of course, Ed Sheeran’s Shape of You all follow the drum pattern characteristic of dancehall. Check it out on Splice’s Beatmaker. We think you’ll recognise it...

Minimalism is in. Just take a listen to Migos’ Bad and Boujee and Bruno Mars’ That’s What I Like, currently numbers 2 and 3 respectively on the Billboard Hot 100, and you can immediately hear how light the instrumentation is.

The same goes for Shape of You; large sections of the song have only two or three instrument parts playing at the same time. We don’t even get a kick drum until the first chorus, almost a minute into the song, and the bass doesn’t come in until even later.

However, the track still feels full. For the verses, the marimba fills up the low end, the guitar-tapping percussion fills up the high frequency spectrum, and Sheeran’s vocals nicely occupy that all-important mid-range. Changes in dynamics and energetic percussive elements - claps, guitar strums, the well-timed punchy snare sample - keep the listener interested for the nearly four-minute song.

Splice has compiled a collection of samples that sound like the instruments found in Shape of You so you can test your production chops by recreating the song, or make your own would-be chart-topper. Check it out on the Splice website.