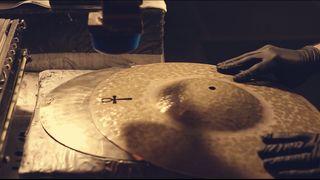 Sabian and A&F Drum Co. have announced that the two brands have begun a collaboration to create the new ANKH line of instruments, declaring it the first time a cymbal and drum company have worked together to produce cymbals.

The ANKH Series first comprises four different brass 14” and 16” hi-hats: offered as thin or medium weights in both sizes and available as single cymbals. As well as this, an additional pair of 16” bronze hi-hats have also been released as a ‘matched pair’.

The ANKH Brass Hats were designed by A&F’s Ramy Antoun and Sabian’s Mark Love, and every part of the process - tempering, forming, sizing and hammering - is carried out at Sabian’s Canadian factory. The Brass Hats feature extra large bells, and are listed singly, allowing buyers to choose their configuration of thin/medium pairings.

Likewise, the ANKH Bronze cymbals are cast from Sabian’s B20 bronze formula, and also feature oversized bells. However, both of these versions of the ANKH line will be made in very small numbers - Sabian plans to limit the production run to just 75 pairs of hats in total each month, claiming in excess of 10,000 pairs of HH hi-hats are sold globally per-month.

The Bronze ANKH Matched Pair, meanwhile, are due to cost $699. ANKH cymbals will be available via all Sabian and A&F dealers.

Watch the videos below to hear the hi-hats in isolation.