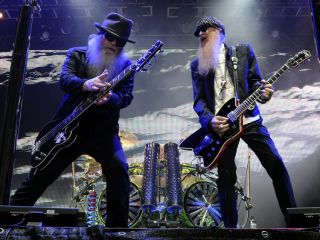 The music and legacy of ZZ Top will be celebrated on A Tribute From Friends, due 11 October, which features artists as diverse as Wyclef Jean and Filter interpreting the songs that made "That Little Ol' Band From Texas" famous.

All of the album's tracks have been newly recorded, specifically for the project. These include Filter's performance of Gimme All Your Lovin', Grace Potter & The Nocturnals' take on Tush, as well as Wolfmother's version of Cheap Sunglasses.

Fleetwood commented, "We're delighted to honor ZZ Top this way. Their legacy, like that of the original Fleetwood Mac, is steeped in the blues we all love so much. I know that Steven and Jonny feel as strongly about their legacy as John and I do."

After Billy F Gibbons, Dusty Hill and Frank Beard were informed that A Tribute From Friends was in the works, they issued the following statement: "When we were told there was going to be a ZZ Top tribute album a while ago and logically asked, 'Who are we paying tribute to?' Then we found out that a bunch of great artists were paying tribute to us and we were in disbelief.

"For the past 40 or so years, all we've done is get out there and crank it and try to have a good time while doing so. To a great extent, we've succeeded since we're still having a good time so that would be reward enough for 'the same three guys playing the same three chords.' Now comes A Tribute From Friends, and we're so delighted that our music resonates with these great musicians whom we so admire."

A Tribute From Friends Tracklisting