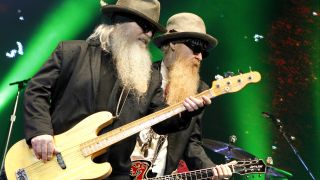 ZZ Top are to collect the Living Legend award at Classic Rock Roll Of Honour 2012.

The bearded Texans will pick up the coveted prize at this year's awards ceremony, the eighth annual Orange Amplification Presents The Classic Rock Roll Of Honour, which is taking place at London's Roundhouse on Tuesday November 13.

Previous winners of the Living Legend Award, which is presented to those artists who have cemented their place in the rock pantheon, include Jeff Beck, Alice Cooper, Jimmy Page, Lemmy, Ozzy Osbourne and Iggy Pop.

Billy Gibbons told Classic Rock: "ZZ Top band members are excitedly gearing up to attend the 2012 Classic Rock Awards, a celebration held in a timely manner following the long awaited release of the new ZZ disc, La Futura. Good times for sure…! We've stuck it out long enough to where this once unpredictable style, which has no basis other than oddness, brought us back into vogue."

With a career spanning over four decades and with more than 50 million albums sold, the 'Tres Hombres' − Billy Gibbons, Frank Beard and Dusty Hill − continue to sell out arenas around the world.

Classic Rock has also announced its shortlist for the reader-voted categories of this year's Roll Of Honour, and fans can cast their votes now at www.classicrockmagazine.com/awards.

The categories voted for by readers are:

Film/DVD Of The Year: choose from George Harrison, Mission To Lars, Mott The Hoople, Pink Floyd, Rock Of Ages, the Rolling Stones and Searching For Sugar Man

Event Of The Year: choose from Aerosmith kiss and make up, Black Sabbath reunite, Boss and Macca get silenced, Download 2012, Ginger Wildheart raises £250k, Lou Reed and Metallica, Queen and Adam Lambert, and the return of classic Status Quo

For more information, check out Classic Rock's website, and get voting...