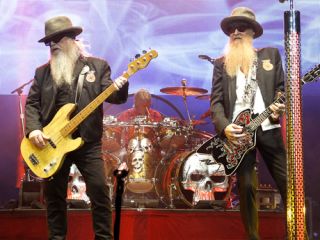 It's been eight years since ZZ Top released an album of new material (Mescalero in 2003), but Billy Gibbons says that the band's latest is currently being mixed and could be out in the fall.

Talking to Mojo magazine, Gibbons said that the still-untitled disc "sounds and feels like Tres Hombres with a few elements of the Eliminator period thrown in. A pretty wide range, from basic blues to slightly more fancy stuff."

While a full trackisting is forthcoming, some song titles have emerged: Flying High, More Slower Blues, Chartreuse and Have A Little Mercy. Gibbons described the latter cut as being inspired by early BB King.

The sessions were executive produced by Rick Rubin. On Rubin, Gibbons said, "The thing about Rick is he pushes the artists to spend more time reaching down deeper than they normally would."

ZZ Top recorded at Shangri La Studios in Malibu, California with engineer Dave Sardy (Oasis, Jet). The trio then moved back to Texas, to Foam Box Recordings in Houston, with long-time engineer Joe Hardy. "It was the Sardy and Hardy party," added Gibbons.

A version of Flying High has already had a rather auspicious debut: it was played en route to the International Space Station on Russia's Soyuz spacecraft. "We figured it'd be the perfect song to pass along to the astronauts," said Gibbons. You can hear the track below.