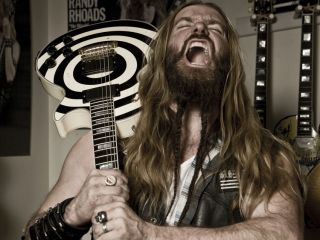 Zakk Wylde has been forced to drop out of the remaining dates of his Pedal To The Metal Tour after being hospitalized for blood clots in both lungs and one leg.

After a concert in Montana on 19 August, Wylde was taken to a hospital where an initial diagnosis was made.

Then, yesterday afternoon, 25 August, Wylde was admitted to Eugene, Oregon hospital and it was revealed that the situation had taken a turn for the worse. Wylde issued this update on his Twitter page:

Zakk Tweets from the hospital

"To all our Black Label Family Worldwide, thanks for all the Get Wells. Every 48 hours in the ER to check my blood, had a CT scan today and have blood clots in each of my lungs as well as my leg. Can't sing because pushing can cause an embollism. Wacking me with"

And then the Tweet ends, leaving us to ponder what he's being 'wacked' with. But if you ever wondered what Zakk Wylde might look like in a hospital gown, wonder no more - he's posted this picture on his Twitter page:

At least he's kept his sense of humor, especially now. Face it, this hasn't been the easiest of summers for Wylde. First Ozzy Osbourne announced that he's seeking a replacement guitarist (without even telling Zakk, it seems). Then Osbourne played the BlizzCon convention with what would appear to be his new guitar player, Gus G from the band Firewind (see video here). And now this.

MusicRadar wishes Zakk Wylde a full and speedy recovery. And if you want to give Zakk a Tweet, management tells us he wants to hear from you. Contact him at @ZAKKWYLDEBLS