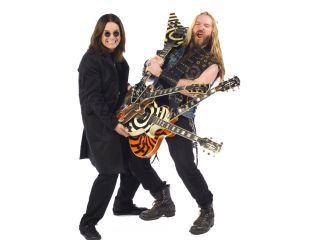 Ozzy Osbourne without Zakk Wylde? To millions of metal fans, it's downright unthinkable. But in a recent interview with Classic Rock, Osbourne said he was seeking a new axeman.

"I'm getting a new guitar player as we speak," Ozzy told Classic Rock Editor In Chief Scott Rowley, "and everyone has been saying to me for a long time, 'Get Johnny 5!' And I tried him at one time and I didn't really give him a chance. We'll see, I don't know."

Regarding his long-time relationship with Wylde, Osbourne said, "I haven't fallen out with Zakk, but Zakk's got his own band, and I felt like my stuff was beginning to sound like Black Label Society. I just felt like I wanted a change, y'know?"

As for other potential candidates, Osbourne said, "I've got a guy from Greece coming in - not the musical, the country of Greece - but I'm not going to say too much about it, 'cause I don't know myself at this point."

Osbourne revealed that he's been working on a new album with producer Kevin Churko, and while Wylde has contributed guitar parts to the project, it wasn't clear if they would make the final cut. "Zakk came down and did a bunch of stuff and I don't know if I want to use it but I've got it there if I do." Osbourne said.

So what does Zakk Wylde make of all of this? The hulking, Gibson-wielding guitarist is in the dark, to say the least:

"I'm doing BlizzCon [convention in Anaheim, California] with [Ozzy] in August and supposed to finish up the [new Ozzy] CD in September," Wylde wrote on his Twitter account. "This is news to me. I haven't heard anything about this. Until I talk to the Boss, I don't know. I love Ozzy."