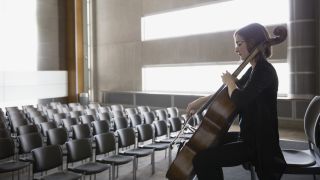 Without getting too philosophical about it, there has to be a reason why we make music. However, not everyone's reason (or reasons) will be the same.

For some, the sheer pleasure of picking up and playing an instrument, producing something out of nothing in a DAW or mixing on a set of decks is enough. The joy lies in the process.

Others strive to create something that they can call finished - perhaps in the hope that people will listen to and enjoy it - and, as horrifying as it may sound, there are some who practise tunesmithery with the sole intention of making money.

What, though, motivates you? Is your music making an entirely personal endeavour (maybe you never play anything to anyone?) or is it all about the audience? We asked you to send us your comments, so hear are some of the best of them.

Your answers: would you make music even if you knew no one would ever hear it?

"Duh I would! I do, in fact! Music is primarily personal. Being motivated by some audience or audiences is just setting yourself up for disappointment."

"…But then there's a point in your life where you have to make a living some way, some how, and what better way to make a living than by doing something you love? Would you rather make music as a product or work at a factory?"

"I make music and beats depending on how my daily thoughts play out. I don't let others listen to it, though; it's kind of a personal log of life but in beat form."

"I find creating music very therapeutic. It's also a great creative release and, as someone who used to be an amateur writer and a programmer, it shares a lot of the same rhythms.

"Of course I'd love to become hugely successful and well known and have my music appreciated by millions of people. Knowing that after I'm gone there will be some of me still touching people's lives, that's a big motivator, too, but realistically that isn't going to happen. You can't base your life on a wish."

"Of course, it is a pure bliss to enjoy the creation of music. On the other side, music is about sharing, and I can feel that when I listen to music with someone else - that the music receives new qualities from this shared experience. However, to make music with the sole goal of reaching the largest audience… it's a perversion of this modern age and it is on the opposite side of the whole point of transforming silence into sounds, which we enjoy."

"Music has always been an outlet for self expression. While music has become a tool of consumerism for some, for the majority it will always be a way of letting the mind explore. The satisfaction that comes from arranging 12 notes into art is reward enough without it having to be heard by anyone except yourself."

"I do it for myself and put it on SoundCloud where it is mostly ignored. I once had an audience for 25 minutes - set up a live band to play along to my compositions - and the gig went down an absolute storm. Band broke up for silly reasons. Meh. C'est la vie."

"Ultimately, I can only make music for myself and hope that others like it. It is of course possible to craft music for an intended audience but, even then, I'm crafting in such a way that I have to find it worthy before I release it, which is another judgement call that comes from my own set of values, and my position as ultimate judge of my work. I'm not sure I could escape it wholly. Maybe that's my next goal."

"I made an album. It's on Spotify. No one's heard it. Do I care? Not really. I still made an album. That was my goal. Oh, and some guy in Moscow ordered ten copies. That was about it. Still. One fan in Moscow. That's pretty cool."

"Does everyone that works out at a gym become a professional body builder? Playing an instrument is exercise for the mind!"

"As much as I'd love to have a super large fanbase I can live without one. People who make music purely for the popularity tend to get forgotten quicker or run the risk of sounding generic."

"Yes. It's preferable to playing golf!"