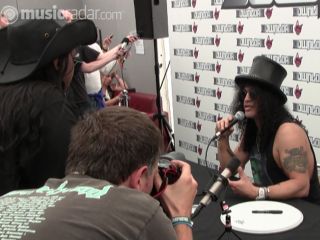 Sunday 13 June saw Slash play a triumphant set at Download 2010. Featuring Myles Kennedy on vocals, Slash and his band ripped through a set that featured songs from his solo LP, Guns N' Roses classics and Slither by Velvet Revolver.

At the pre-show press conference, Slash fielded questions from a crowded press room, revealing that the search for a new Velvet Revolver singer is still ongoing, and commenting on the recent stage invasion that saw his guitar broken in Italy.

To see pictures from a storming set that included Appetite For Destruction songs Rocket Queen, Paradise City, Nightrain and Sweet Child O' Mine, check out our Download 2010 gallery.

In addition, here's a fan-filmed clip of Paradise City from the performance: