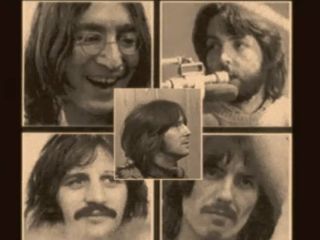 On "Gently Weeps," The Beatles became the Fab Five

Some things escape even us, like this dazzling YouTube clip featuring Eric Clapton performing his searing, uncredited guest guitar spot on The Beatles' While My Guitar Gently Weeps. But when we were alerted to its existence, well, naturally we had to share it.

During the recording of the double-album The Beatles (commonly referred to as the "White Album"), the Fab Four were battling on an almost daily basis. To lighten the mood, George Harrison asked his good friend Eric Clapton to come and play on a song that he felt wasn't getting proper attention in the studio.

"I was with Eric and I was going into the session and I said, 'We're going to do this song. Come on and play on it,'" Harrison said. "'Oh no. I can't do that. Nobody ever plays on Beatles' records.' I said, 'Look, it's my song and I want you to play on it.' So Eric came in and the other guys were as good as gold because he was there.

"Also, it left me free to do the vocal and play rhythm. Then, we listened to it back and he said, 'Ah, there's a problem, though, it's not Beatley enough.' So, we put it through the ADT [automatic double tracker] to wobble it a bit."

Clapton recorded his guitar track on 6 September 1968 (the basics were laid down the previous day). While it has been speculated that he played a Les Paul through a Fender Deluxe, others have gone on record that the guitar was, in fact, a "Beatles-owned" SG with a Maestro Vibrola.