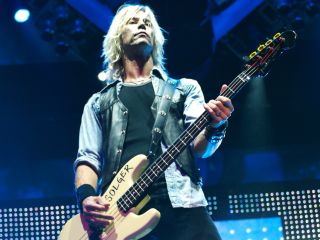 Get Loaded's second album for free

Loaded, the band formed by Velvet Revolver bassist Duff McKagan (on guitar and vocals) are giving away their last album to help promote their September tour. McKagan formed Loaded after he left Guns N' Roses, and their second album Dark Days (2001) is now available for free download.

Loaded are also recording documentary 'webisodes' detailing the current recording sessions for their third album, due later this year.

While Velvet Revolver search for a new a lead singer after Scott Weiland's departure, Loaded appears to be McKagan's priority. Despite VR drummer Matt Sorum's recent comments to MusicRadar about a likely Guns N' Roses reunion, McKagan says: "There is no backroom talks, there never has been… but anything can happen. You see all these bands getting back together. I guess hell froze over for The Eagles and they did it.

"But it's not something I count on, or even need in my life."