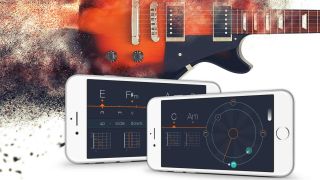 Uberchord Guitar - which "'listens' to you play and gives instant analysis and feedback like a real guitar teacher" - has signed a licensing agreement with Universal Music to include their music on the guitar-learning app.

That means users can learn chords, rhythm and lyrics from the likes of Metallica, Elton John and Jack Johnson, as well as thousands more - and talks are underway to get more music publishers on board.

Available for free on iOS devices, Uberchord Guitar offers a number of modes, including a chord trainer, which offers real-time feedback, finger correction and instant adaptation to your skill level.

An advanced chord recognizer, which claims to detect even the most complicated jazz chords, also features, while a chord finder enables users to quickly look up voicings.

With the addition of licensed music, Uberchord Guitar now costs $4.99 per month from the App Store- head over to the Uberchord website for more info.