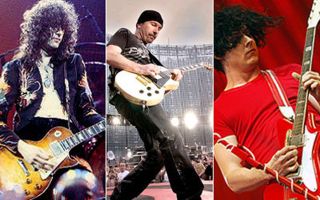 The Edge hearts Jimmy and Jack

He won't be touring with his Led Zeppelin mates this year, but Jimmy Page is still influencing guitarists - namely The Edge, who says his playing on the U2's upcoming No Line On The Horizon is greatly informed by the Led Zep axeman.

You can list White Stripes guitarist Jack White as a recent influence as well.The Edge spent considerable time hanging out with White and Page when the trio took part in filming the documentary It Might Get Loud.

"I was just fascinated with seeing how Jimmy played those riffs so simply, and with Jack as well," The Edge told Rolling Stone.

With Edge - no slouch when it comes to six-string innovation himself - copping some vibes from Page and White, and stomping on pedals such as Death By Audio's Supersonic Fuzz Gun, we can't wait to hear what the new U2 album sounds like. Whole Lotta Love meets Ball And Biscuit meets...?

And when we do hear No Line On The Horizon, we'll be sure to give you a full report.