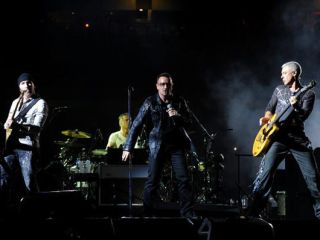 According to U2, they're going to stay in your faces (Image credit: David Atlas/Retna Ltd./Corbis)

While U2 are in the midst of their massive 360 Tour that will take them around around the globe well into 2010, they're already planning their next album, Songs Of Ascent, and according to The Edge, it'll come "sooner rather than later."

Speaking to Rolling Stone, the U2 guitarist said, "There's a bunch of amazing pieces that we didn't finish from the work we did in Fez [for No Line On The Horizon], and there's the songs we started with Rick Rubin, some of which are amazing songs that I'd love to get back to at some point.

"The one thing is we'd love to follow this album up sooner rather than later," Edge added. "I don't think we'll have over three years or whatever it was between the last two records."

Drummer Larry Mullen Jr agreed, saying, "I definitely think we should do something good as soon as we possibly can, as opposed to quickly. I'm feeling that it's the unfinished songs from this record that we should be concentrating on. I think there's a part two of this record. I would like to think that we would have a song that would end up on the radio."

As for Bono, he said that Songs Of Ascent is "a very clear idea." However, the singer was quick to stress that "if we're going to do another rock record, I want to do Spider-Man [the Broadway musical for which he and The Edge have written music]. I just haven't talked Adam and Larry into that."

MusicRadar recently spent time with The Edge's guitar tech, Dallas Schoo. Be on the lookout for an interview and a full breakdown of the gear and guitars Edge uses on tour.