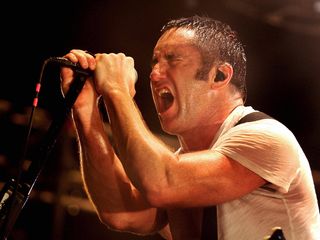 Gary Numan has revealed that he and Nine Inch Nails man Trent Reznor plan to collaborate either later this year or at some point in 2010.

Reznor has recently said that he plans to stop touring, but Numan, who was a special guest at NIN's recent London O2 shows (check out the video below) told The Quietus: "I know he wants to carry on doing music things. We went out a few days after [the LA gigs] with a few other people and the way he puts it is when the dust settles - I think he means his marriage - but I think he's going to be pretty busy for a while, so it'll either be later this year or early next."

The arrangement seems fairly casual at the moment, with Numan refusing to commit to creating a whole album's worth of material. He says that the plan is to work on "Probably just a few songs to start with and see how it goes on. It'll be cool."