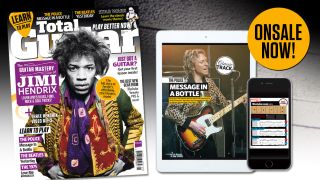 Total Guitar issue 275 is out today in print and worldwide digitally.

Click here to get a print copy of this issue

Click here to get a copy of this issue through Google Play (PC, Mac, Android)

This month
Inside, we celebrate the release of Fender's brand new Jimi Hendrix Stratocaster with the first UK review, plus tutorials on how you can learn the great man's best guitar tricks. From rhythmic trills to phsycadelic chords, funk rock runs and soaring lead techniques, Hendrix had them all - and more - and we've got lessons on the whole lot, complete with audio examples for you to play along with.

Learn to play
Elsewhere, we've delivered the largest amount of tunes and video lessons of the year, all with audio on your CD:
The Police 'Message In A Bottle
The Beatles 'Yesterday'
Star Wars - learn the main riff of the biggest film soundtrack this year!
The 1975 - Love Me (video lesson on your CD)
Jimi Hendrix Video Lessons - Learn three of Jimi's biggest intro riffs (Foxey Lady, Voodoo Child (Slight Return), The Wind Cries Mary)