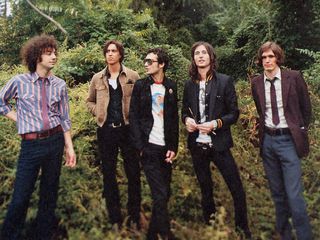 With the seemingly endless supply of Strokes' side-projects finally running out, the band have reconvened to work on their fourth album, the follow-up to 2006's First Impressions Of Earth.

"The Strokes are now all back hard at work in their NYC space on writing and rehearsing new material," said manager Ryan Gentles in a mailout to fans.

"No recording studio time has been booked yet, as they sketch out the blue-prints of new songs and fine tune plans in their rehearsal space, but it will undoubtedly be all mapped out and etched in stone at some point in the not-too-distant future."

"I wish I could tell you that this DEFINITELY meant we can expect an album release date before the end of 2009, but it's just too soon to speculate on that for sure yet," he continued.

We'll just keep on waiting, then.