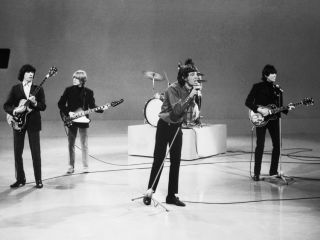 From Time Is On My Side to Honky Tonk Women, all the songs that The Rolling Stones performed on The Ed Sullivan Show, from 1964 to 1969, are being released on DVD.

On Tuesday, 4 October, an abridged set containing four episodes will be released. But on 1 November comes the complete package, containing all six episodes in which The Rolling Stones appeared.

"The best Rolling Stones TV performances are on these shows," says Andrew Solt, executive producer of the sets. "On the concert films and on other shows you don't get the same production values, and here the sound is as good as the visuals... [On Ed Sullivan] Groups knew they would appear in front of 35 million people so they rehearsed and made sure they would look good before doing on. Knowing they were playing live on TV made them do their best."

Seen together, the shows offer a fascinating look at how much the Stones changed in five years - as well as Sixties culture. On 25 October 1964, the band, dressed in suits, performed the songs Around And Around and Time Is On My Side to the constant shrieking of teenage girls.

On 2 May 1965, the band returned to play three numbers: The Last Time, Little Red Rooster and Everybody Needs Somebody To Love. Nine months later they were back, on 13 February 1966, stomping through three original smashes: (I Can't Get No) Satisfaction, As Tears Go By and 19th Nervous Breakdown.

On 11 September 1966, the band were in glorious form, playing Paint It Black, Lady Jane and Have You Seen Your Mother Baby, Standing In The Shadows? Brian Jones made his last appearance on Ed Sullivan on 15 January 1967 when the Stones were forced to change Let's Spend The Night Together to Let's Spend Some Mmmm Together. They also performed an uncensored Ruby Tuesday.

A couple of weeks before the notorious Altamont concert, The Rolling Stones ended their Ed Sullivan run in dramatic fashion. They had a new guitarist, Mick Taylor, and they were in stark contrast to the suit-and-tie wearing band from five years earlier. Mick was sporting eyeliner and mascara, and Keith was doing the rooster hairdo. The group played three numbers during this show, Honky Tonk Women, Gimme Shelter and Love In Vain.

In the video above (not taken from the DVD set), the Stones mime to Honky Tonk Women (although their vocal mics are turned on). Check out Ed at the end, telling Mick he'll see him in the dressing room at Madison Square Garden. And to think, they used to call Dick Clark "the world's oldest teenager."