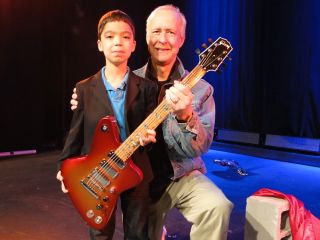 There aren't too many industries in which designs over half a century old are still considered to represent a high watermark. Yet for all the innovation that has expanded the potential of the electric guitar and made players' lives easier in the decades since, it's still those 1950s and early '60s icons that get pulses racing.

The Telecaster (born in 1950), the Les Paul (1952), the Stratocaster (1954) and the ES-335 (1958), along with a handful of other models from stables like Gretsch and Rickenbacker, still provide the platforms for the overwhelming majority of electric guitars in production across the globe. Aside from aesthetics, the sonic fingerprints of those instruments - found all over early rock 'n' roll and the British beat and blues booms of the '60s - are subject to a similar level of reverence and mass-emulation.

Post Van Halen, a certain type of hard rock and heavy metal guitarist would set off on a different trajectory thanks to the hot-rodded 'Superstrats' popular since the 1980s. However, even those guitars are still based fundamentally on the bolt-on neck architecture conceived by Leo Fender in the late 1940s; albeit updated with outrageous graphic finishes, high output humbucking pickups and double-locking vibrato bridges.

Hundreds of apparently revolutionary alternatives have been marketed in the last few decades, but none have managed to endure like those first iconic electrics, themselves so futuristic in the early 1950s.

Some of the biggest names in rock might have embraced innovation along the way, but time and time again, mainstream acceptance has been in short supply. Despite a high profile 1980s advertising campaign featuring a somewhat dishevelled Jimmy Page playing a Roland G-707 guitar synth controller, then, as now, it's Page's Zeppelin guitars - the '59 Les Pauls, the EDS-1275 doubleneck - that hold the allure.

Happily, none of the above has stopped guitar manufacturers trying to invent something new. The history of the electric guitar is littered with examples of products that were unsuccessful initially but went on achieve iconic status.

The sci-fi lines of Gibson's Explorer and Flying V were virtually laughed out of music stores in the late 1950s, while even the PAF-equipped Les Paul Standard failed to find its niche until six years after it had been discontinued. Then a certain Mr Clapton plugged it into a Marshall in 1966 and reinvented the sound of electric blues...

Similarly, although it was popular with bassists, Fender couldn't have predicted that its late 1950s Tweed Bassman would become arguably the most important electric guitar amplifier of all time, or that its Jazzmaster and Jaguar guitars would find such favour decades later with leftfield indie noiseniks and grunge rockers.

As we enter 2011, the vast majority of guitar music is still being performed and recorded using equipment that in most other industries would by now be as outmoded as a Model T Ford. Will today's innovators just have to bide their time and wait for the right artists to come along to exploit their designs to their full potential? How long will they have to wait until their instruments are seen as more than just a niche concern, or worse, gimmick-loaded white elephants? Is there even a significant appetite for modernity amongst the guitar-buying public?

Take Gibson's big launch of 2010 as a case in point. Like its forerunner, the Dusk Tiger, the Firebird X has undeniably huge sonic potential. Whether or not there's a demand for this potential in the current market, Gibson has never been afraid to fall flat on its face in the name of innovation; a characteristic that has to be applauded.

However, the very nature of the instrument's launch event, which saw Gibson Chairman and CEO Henry Juszkiewicz smash a traditional electric guitar and claim that his company have reinvented the instrument, seemed heavy on Steve Jobs-style bravado. Unlike Apple's mass market reach, Gibson appeared to be making a hell of a lot of noise about a product limited to just 1800 examples worldwide and, at $5570, priced way out of the reach of all but the most well-heeled.

There's no doubt that there are players out there who are attracted to the idea of a self-tuning guitar with vast array of sounds onboard, but we can't help feeling that Gibson is shooting closer to the mark with the more traditional appearance of its Les Paul Standard 2010 Limited and Robot Les Paul Jr Special. Guitarists are a conservative bunch, but we are considerably more receptive to innovation when it is aesthetically discreet and packaged in a way that looks like the guitars wielded by our heroes on the posters that hung from our teenage bedroom walls.

For this reason, it's the curvaceous and sonically versatile new Vox guitars with their familiar outlines that seem to point the way. Although Vox's CoAxe pickups are designed to offer a range of subtle variations on a theme rather than aping a whole guitar collection's worth of voices, there's plenty of scope to take the CoAxe's sounds and make them your own.

If you must have a song with a 12-string intro followed by a banjo middle-eight and a sitar in the chorus, then Line 6's James Tyler-designed Variax is available in enough of a Strat-like guise to ensure that you don't look too jarringly modern while performing it. Of course, if you want to turn your faithful old electric into a modelling monster and transform its sound beyond recognition without the need for any permanent physical modifications, then Roland has had the answer for some time now.

If it's just the creative potential and labour-saving convenience of self-tuning technology that you crave then the Wilkinson ATDHT440 bridge - hopefully to become available as a Stratocaster retrofit in 2011 - might just get your nomination for the most important innovation to arrive in 2010.

In the light of all this, we predict that NAMM 2011 will see the launch of an instrument that sounds like all of the classics and yet can go boldly where no guitar has gone before, tunes itself and is artificially aged so that it won't look out of place even if Keith Richards decides to play one. Either that or an affordable, Epiphone-branded Les Paul or ES-335 with Robot Tuning and a bundle of modelled sounds onboard. Super guitars for the masses? Now that would be revolutionary…