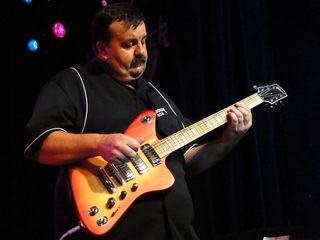 Gibson Chairman and CEO Henry Juszkiewicz smashed a traditional guitar at the start of a press conference today at New York's Hard Rock Cafe. After doing so, he unveiled the company's newest invention, the Firebird X. "This is new," he said. "This is different. This is revolution. Nobody looks and spends the time to reinvent the guitar. This is a new guitar."

So what is the Firebird X? It's shaped like a non-reverse Firebird meets a Fret-King Espirit meets a Fender Jaguar (and with its ash body and maple neck, it's even more Fender-y) and it's designed, we imagine, to be something of a one-stop-shopping guitar/device, sort of like Line 6's Variax models. The latest Gibson super-guitar is outfitted with a piezo pickup at the bridge and three magnetic humbuckers, along with a guitar effects processing system built into the body of the instrument and the Robot self-tuning system.

In addition, the Firebird X comes with Ableton Live 8 and Guitar Rig 4 Pro software, Bluetooth wireless technology, two foot pedals and rechargeable batteries. With a suggested retail price of $5570, the Firebird X (available 11 December) won't be on everybody's shopping list. But ast the instrument is limited to just 1800 pieces, that more than makes the point moot.

To check out full spec and detailed images of the Firebird X, head over to Gibson's site.

Want to know what the Firebird X is up against in the ever-growing super guitar market? Then check out our recent round-up of futuristic axes.