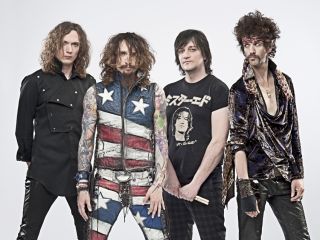 Ever-divisive Lowerstoft rockers The Darkness have unveiled a brand new single, titled Every Inch Of You, taken from their forthcoming album Hot Cakes.

With lyrics like, "I'm in a band with my brother and my two best mates and I never leave the house without my SM58", it's unlikely to win over The Darkness doubters, but it does show the band concentrating on what they do best - cocking about.

Every Inch Of You is the second track to be unveiled from the long-awaited new album Hot Cakes (due 20 August).

The band previously unveiled Nothing's Gonna Stop Us back in February, complete with a video that featured a cameo by MusicRadar's sister magazine Total Guitar.

Since then the band have been touring in the US and have recently been announced as the main support for Lady Gaga's upcoming Born This Way Ball European tour dates.

Check out the full Hot Cakes track list below, including a surprise cover of Radiohead's Street Spirit (Fade Out)…