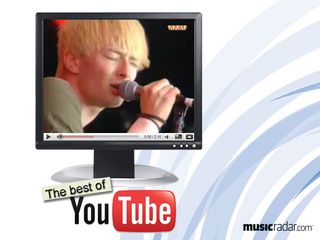 No idea where the hell this clip came from but it's an excuse to write about San Diego one-man no-fi noisenik, Nathan Williams. Where other C86 apologists Vivian Girls and The Pains of Being Pure At Heart channel the twee-er end of that 20-year old (!) movement, Wavves have been grooving solely on Psychocandy-era Jesus and Mary Chain (via Flying Nun) for their distortion-soaked pop. Don't let that blogger's favourite tag put you off - Wavves are here to stay. Mike Goldsmith

Math rock - like 'post-rock' - is one of those supposed genres I think I know when I hear, but can barely explain. Check this dude and his geometric hair for a drumming 101 on all things math. The finest name for a math rock band is obviously Congratulations On Your Decision To Become a Pilot, but they're not very good. The Dilllinger Escape Plan remain lauded. Oh, hang on aren't they 'mathcore'? Whatever - it's rock music with tricky drumming. Michael Leornard

Radiohead are headlining the Leeds and Reading festivals this year. So what better time to look back at one of their breaking performances - indeed, the last time they played the event: fifteen years ago. Just was an epochal moment in the band's career, and to this day is as fresh as a daisy. And look at Thom's hair! Amazing. Jamie Smith

iBone iPhone app is not what you think

It's a playable trombone! Executed perfectly over New Soul by Yael Naïm (the one from the MacBook Air ad). Unlike Nine Inch Nails' app, this one is nice and simple (Via: BBG). Tom Porter

Billy Bob Thornton shows how not to do an interview

As an actor, Billy Bob Thornton knows how to deliver lines. When it comes to radio interviews... not so much. During a recent radio appearance with his band The Boxmasters, Thornton, who looked as though he would rather be undergoing a colonoscopy, answered every question with "I don't know what you're talking about," "I don't know what you mean" and the like. His band, however, soldiered through gamely. Finally, it became clear that Thornton was miffed that the interviewer would have the nerve to mention his cinematic achievements instead of focusing solely on his well-known musical endeavors. Oh, boy. Or was Thornton merely pulling a Joaquin Phoenix? Hard to tell. Good thing the host didn't bring up Mr Woodcock! Joe Bosso

Remind yourself of the genius of James Brown And The JB's. Have a fonkee Easter.