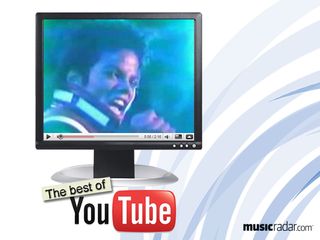 This week's round-up recalls classic interviews (an awkward yet intriguing few minutes with Thom Yorke), classic performances (Michael Jackson in '87 and Bad Brains in '88), classic TV shows (no, not Old Grey Whistle Test - this week you've got Blue Peter...), plus a couple of more contemporary clips too.

While My Ukulele Gently Weeps

What happens when one of the world's greatest ukulele players and one of the world's greatest acoustic guitar players get together to play one of the greatest songs ever? Well, something very, very inspirational indeed: here's Jake Shimabukuro and Tommy Emmanuel playing The Beatles' While My Guitar Gently Weeps. Like what you hear? Then you'll probably like Shimabukuro's solo rendition of the same song, and you'll probably like MusicRadar's guest video lesson with Mr Emmanuel, too. Chris Wickett

The world's most awkward interview… with Thom Yorke

Interviewers, ask Thom Yorke about the end of Radiohead at your peril. Ignoring the questions, here's a collection of Thom's answers over a painful two minutes following the release of Kid A: "Yep. No. I have a real problem with people asking that. Next question. Yep. It's not your business. It's a fucking waste of time for everyone concerned." (Via: Rolling Stone) Tom Porter

British kids' TV in the mid sixties playing host to what was then one of the dirtiest fuzztones ever committed to tape. It sounds pretty damn good in 2009 too, just check out that guitar solo. Chris Vinnicombe

I'm still not exactly sure what fans are expecting from Michael Jackson's mammoth series of gigs at London's O2 Arena, but if it's to see him sing live while simultaneously dancing his ass off - as he does in this 1987 clip - then I do worry that they're going to be left disappointed. We shall see, though. Ben Rogerson

Everybody knows The Priest are Harley-ridin', twin-guitar-attackin' metal gods. But they didn't always ram it down. No, no, they had to practise. Here they are back in the day, working out their synchronized stage moves, perfecting their dual leads - and, of course, Rob is developing his signature operatic howl we all know and love. Joe Bosso

For those unable to catch Glasgow-born HudMo's Bloc 2009 3.30am set tomorrow morning, you can get the full story behind Warp's new wunderkind or the 'wonky' scene here and here. Alternatively, just bask in this: an unofficial Audiosurf-generated video for a track from his recent Polyfolk Dance EP on Warp. Between HudMo and fellow wobbly Scot Rustie, 2009 sees Warp as vital as they've ever been. Mike Goldsmith