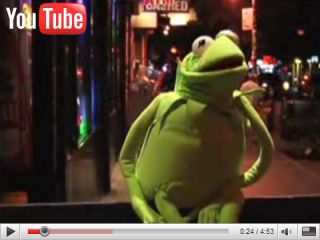 It's Friday, which means the MusicRadar team submits its own personal favourite music videos and clips on the net.

All clips are now embedded so you can enjoy without having to click elsewhere. And we've got the usual level of worthiness and weirdness - from iPod-charging onions to 'serious' classical music.

We've covered Little Boots's experiments with Yamaha's oh-so-covetable Tenori-on before here on MusicRadar but synth-popstrel Victoria Hesketh's appearance in today's BBC's Sound of 2009 shortlist leads us to post this homemade treat. No surprise of cover version given Hesketh is working with Hot Chip's Joe Goddard - interested parties should check out her regular Funtimes! bedroom cover versions including Planet Perfecto (!) and Wiley. Of course. Mike Goldsmith

This one's been doing the rounds, but if you haven't seen it yet, you should check out Kermit miming to New York, I Love You, But You're Bringing Me Down. It's strangely touching (well, as touching as watching a cloth frog sing can be), and it's worth watching until the end to find out who the puppet master is… Ben Rogerson

How to charge an iPod with an onion

You will need: an iPod, two cups of Gatorade or Powerade and an onion with a hole poked in either side. Submerge the onion in the energy drink for 30 minutes, remove and dry off the excess fluid. Push the USB charger (not the mains adaptor!) into the onion and voila: enough charge for 15-20 minutes. Apparently, it uses electrolytes, but we all know it's magic really. Tom Porter

The Ronettes perform Be My Baby live on TV

It doesn't get much better than this. Comfortably one of the greatest slices of pop ever committed to tape, Phil Spector's production genius is still a huge influence. Not least for this week's MusicRadar interview stars Glasvegas, who recently performed their own stripped down interpretation of the track at an instore gig. Chris Vinnicombe

This is a PSA. I don't play a classical instrument - unless triangle counts? - but any of you who do should get involved in this collaborative YouTube venture. We'll report back on progress in coming months. Michael Leonard

They call themselves The Best New GNR Cover - a bad name for a tribute band, but when Paradise City, Sweet Child O' Mine, Mr Brownstone, Appetite For Destruction et al have already been taken, you gotta grab what you can. What's interesting about this 'new' Guns N' Roses cover group isn't so much that the singer does a just-passable Axl, nor the fact that they have a dude decked out in Buckethead garb; it's that in 2007 they're playing the song Chinese Democracy - which was officially released just weeks ago. Huh? Joe Bosso

Then you simply must hear an the a capella vocal of Joe Elliot from Def Leppard recording Rock Of Ages. Remember, this man is from Sheffield, Yorkshire.