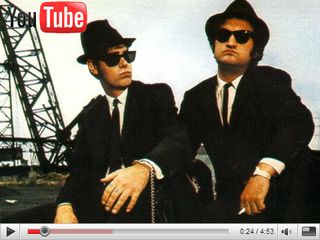 What do you get if you cross the ultimate 80's metal show band, an attractive lady playing a Tenori-on and Aretha Franklin being very persuasive in an all-American cafe? This week's best of YouTube, of course. What's not to love?

Little Boots Meddles with Tenori-on
Good skills from British singer Little Boots, who scored big tech points last week when she performed Meddle on Later With Jools Holland. Not only did she play a Yamaha Tenori-on - she also threw a Stylophone into the mix. You can also watch her honing her skills in her bedroom earlier this year. BR

Amp Fiddler plays the Nord Electro
Clavia launched the third-generation version of its Nord Electro this week - if you want to find out why keyboard players love it so much, check out its silky sounds in Amp Fiddler's studio performance of I Believe In You. BR

Farewell, John 'Mitch' Mitchell
I'm not a big fan of drum solos, but this warrants an airing this week. Here's the late Mitch Mitchell with The Jimi Hendrix Experience, 1969. Note his left hand 'jazz grip'. Great drummer. That's all. ML

Slipknot's 'guitar cam'
Slipknot's Mick Thompson makes a huge noise, but will aspiring shredders be impressed to see up-close how he plays People=Shit? Question: is this harder or easier than it looks? ML

Shellac - Steady As She Goes
I'm going for abrasive and aggressive this week, and Steve Albini and chums are certainly rather expert in that area. Several thousand miles from Illinois, Cardiff's Future Of The Left are rising stars of skewed, ferocious rock music. In a previous life, two of the trio featured in McLusky, a band produced by Albini who were responsible for some of the sweatiest and most fearsome live performances I've ever witnessed. Like that? Here's some more. CV

Two Gallants perform Waves Of Grain live
Less immediately visceral but no less intense are San Francisco blues-folk duo Two Gallants. This epic is the finale of their second LP, What The Toll Tells, and for us it cements frontman Adam Stephens's status as one of the finest lyricists of the age. Drummer Tyson Vogel is one hell of a sticksman too. CV

Stuart rocks out to The Killers V-Drums
Stuart is a drummer long on skill but short on apartment space. So he rocks his Roland V-Drums and does a beautiful job of The Killers' Jenny Was A Friend Of Mine. Note his bass drum patterns - spot-on, dude! JB

Quill - The Ultimate '80s Metal Show Band
Quill are an Australian metal band - the 'ultimate,' they say - and here they are performing Yngwie Malmsteen's Rising Force. The guitarist doesn't swing his axe around his neck, he does put his foot on his monitor - the 'ultimate' '80s rock move. And for good measure, at the end, both he and the (female!) lead singer rest their feet on the drum riser. This is known in rock circles as 'double ultimate." JB

The Faces - Stay With Me (live 1972)
It's official: Ronnie Wood and Rod Stewart are putting The Faces back together. Here's the band doing Stay With Me in 1972 at the Rainbow Theatre, London. See if you can count how many keepy-ups Rod manages at the start. It won't take you very long. TP