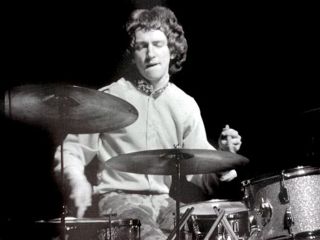 Mitch Mitchell, the jazzy, versatile drummer who helped propel the sound of The Jimi Hendrix Experience, died yesterday, 12 November. He was 61 years old and the last surviving member of the groundbreaking band.

His body was discovered in his hotel room in Portland, Oregon. According to a medical examiner, Mitchell passed away from natural causes.

Ironically, Mitchell had just completed an 18-city American tour as a featured performer with Experience Hendrix, a concert series celebrating the legacy of Jimi Hendrix that featured an all-star lineup of artists including his one-time Hendrix bandmate, bassist Billy Cox.

Janie Hendrix, Jimi's step sister, who is the chief executive of the Experience Hendrix tour, described Mitch Mitchell as a "wonderful man, brilliant musician and a true friend. His role in shaping the sound of the Jimi Hendrix Experience cannot be underestimated," she said.

Born John Mitchell in Ealing, Middlesex, on 9 July 1947, he was a noted child actor who starred in the TV series Jennings At School as well as numerous feature films. After falling in love with American jazz, blues and rock 'n' roll, he abandoned acting and devoted the rest of his life to music.

A self-taught musician, he developed an explosive style of playing that was heavily influenced by such drummers as Elvin Jones and Max Roach. Having built a reputation through his work with The Pretty Things and Georgie Fame & The Blue Flames, he, along with bassist Noel Redding, joined The Jimi Hendrix Experience in 1966.

At times, Mitchell's playing - which emphasized fast snare work and cymbal riding - could sound like one giant solo, but it was the perfect style for the Experience. The trio, fueled by Jimi Hendrix's revolutionary guitar playing, were an instant smash at the Monterey Pop Festival in 1967, and soon after they released the album Are You Experienced? which contained the hits Hey Joe, Purple Haze and Foxey Lady.

Watch this incredible video from early 1967, in which The Jimi Hendrix Experience play Stone Free, Purple Haze and Hey Joe for a TV audience in Offenbach, Germany.

The Jimi Hendrix Experience would release two more albums, Axis: Bold as Love (1967) and Electric Ladyland (1968). In 1969 Hendrix broke up the Experience, but Mitchell continued to play with the guitarist until his death in 1970.

Prior to the disbanding of the Experience, Mitch Mitchell participated in one of the most legendary, one-off supergroups of all time, The Dirty Mac. Comprising Mitchell, John Lennon, Eric Clapton and Keith Richards, the quartet played a bracing version of The Beatles' Yer Blues for The Rolling Stones' Rock And Roll Circus, a 1968 TV project that went unaired for decades. Watch the video.

After Hendrix's death, Mitchell joined a band called Ramatam, who recorded one album and opened for Emerson, Lake & Palmer for a number of concerts.

For the rest of the '70s through to the '90s, Mitchell laid low, doing occasional session work as well as participating in various Hendrix-related projects. In 1999, he appeared with fellow Hendrix alumni Billy Cox and Buddy Miles on an album by the late Bruce Cameron.

Most recently, Mitchell was part of the Gypsy Sun Experience band, which also included Cox. And fittingly, the final four weeks of his life were spent celebrating the music of Jimi Hendrix on the 2008 Experience Hendrix tour.

Have a last look at the dazzling talent that was Mitch Mitchell in this video from 1969.