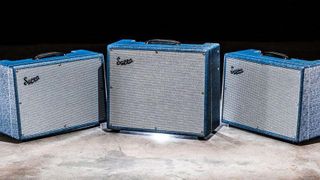 When Supro announced its return at the tail-end of 2013, its reissues of amps such as the 1648RT Saturn Reverb and 1624T Dual-Tone went down a storm - now, the company is setting its sights on the future with a trio of all-new valve combos.

First up is the 1642RT Titan, a 50-watt 1x10 combo designed for gigging guitarists with big pedalboards, with a 6L6 power section, all-valve reverb, output-valve tremolo and a Supro HP10 Hemp Cone speaker.

The Titan costs £1,229, while the Jupiter and Rhythm Master weigh in at £1,329 each - keep your eyes peeled to MusicRadar for reviews soon…