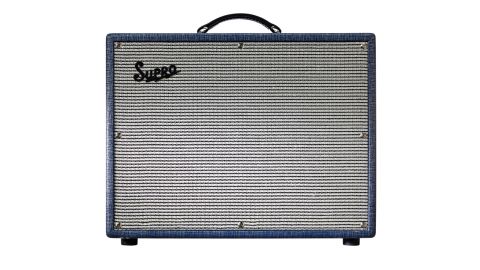 With its different configuration, this is the one if you need some dirt - perfect for 50s- and 60s-style blues.

Newly-revived, Supro's history goes way back to before the birth of the electric guitar, with the creation of the National Resophonic Guitar Company in around 1926, and the merger of National and Dobro in the early-1930s to form Valco and the Supro line of products.

Mostly indigenous to the USA, it's also widely thought that Jimmy Page used a Supro amp on early Led Zeppelin recordings; although the exact model is shrouded in mystery.

In more recent years, the Supro brand was owned by former Fender Custom Shop supremo Bruce Zinky, but in 2013 Absara Audio acquired the rights and set about building a new factory in New York, and a new line of products created by Absara's David Koltai with Zinky's assistance.

So, full circle, and we're looking at one of the first new models to make it over the Atlantic: a reissue of the popular 1964 Dual-Tone 1x12.

Looking as if it just arrived through a time warp from the mid-1960s, the cabinet is built and finished to a high standard, with blue rhino hide vinyl, silver sparkle grille cloth and a white piping accent.

The minimalist control panel is quite similar to the original, with volume and tone knobs for the two channels, and speed and depth controls for the valve-powered tremolo effect.

Inside the chassis, most of the electronics are contained on high-quality printed circuit boards, which hold nearly all the components, including the valve bases.

The preamp valves are mounted on one board horizontally, pointing forward, while the phase splitter and power valves sit on the other PCB, that hangs vertically on the underside of the chassis.

There's no channel switching - although it is possible to swap between the two input jacks on both amps using a standard A/B footswitch.

The overall vibe blends retro cool and traditional styling with high build quality, and the amp should appeal to many mainstream players.

The Dual-Tone has a single 12-inch speaker driven by a pair of silicon-rectified 6973 valves - the 6973 looks similar to an EL84, and like the EL84 dates back to the 1950s - when it powered many jukeboxes and record players.

The slightly overdriven sounds of the Dual-Tone are a real throwback to the 50s and 60s, with a fat, compressed clean sound and a seductive warm growl that turns into a progressively more aggressive grind as you take the volume controls past the halfway mark. It's much easier to push into overdrive, and an altogether more forgiving amp to play.

True to the authentic 60s vibe, there is no effects loop, so you can only position things between the instrument and amplifier. But the results are very impressive and the valve-powered tremolo effect is perfect for classic 50s and 60s American pop and rockabilly.

This new Supro looks good, sounds great and has excellent build quality. You might think it's a bit pricey considering the lack of features and tonal range, but remember this amp is made in the USA, not the Far East. We think it's good value for money and compares favourably with other USA boutique-style amps.

The Dual-Tone's punchy dynamics and gritty overdrive really evoke the classic Chicago blues vibe. It's great to have you back, Supro!