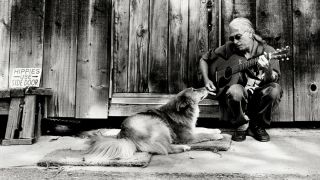 In the late '60s, Joel Rafael migrated from Los Angeles to Portland, Oregon with a group of politically motivated writers and artists in an effort to avoid being drafted into the Vietnam War. During a city-wide sweep of the youth underground, Rafael was arrested and spent 14 days in a Portland jail, an experience the acclaimed singer-songwriter recounts in the wistful folk ballad Old Portland Town, which MusicRadar is premiering below.

Rafael recorded and mixed Baladista at his own Bravebear Ranch in North San Diego County, California. "The album is homegrown in the truest sense," he says. "I used a simple, stripped-down approach and recorded the whole thing at home, here in my own studio." Joining him on the album are Greg Leisz, James "Hutch" Hutchinson, John Inmon and Terry "Buffalo" Ware.

Baladista is available for pre-order at iTunes and Amazon.