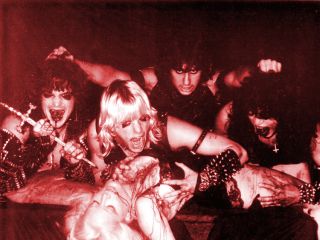 They were such nice, polite young men back in the day

Slayer frontman Tom Araya has hinted at an uncertain future for the thrash metal titans.

Araya, now 47 years old, was asked about the band's future plans in a recent interview with rock and metal website Thrash Hits.

Tellingly, Araya commented: "Seeing a 50-year-old man headbanging on stage would make me cringe. If I was watching that, I'd think, Dude, you're a little too old for that, aren't you? You're gonna fall off!"

It's not all bleak for Slayer fans though - although maybe that's how they like it - as the band will deliver at least one more album as part of the deal they signed with Rick Rubin's Def Jam label back in 1986.

Araya: "Let's put it this way, this is the final record of our commitment with Rick Rubin…we're working on new ideas now just so that people can have a taste of what's coming. Kerry and Jeff are putting together ideas, so what the end result of this next two and a half months is, I don't know. Once we've put together new material, we can get together and discuss our future plans."

What does a thrash star do when retirement beckons? Araya's band mate Kerry King already seems to have a nice sideline signing autographs for fans at trade shows, but what next for the Slayer frontman? Perhaps he could endorse a food product or open a restaurant?

We can see it now - Tom's Steakhouse: Prime beef, slaughtered mercilessly and bloody as hell.