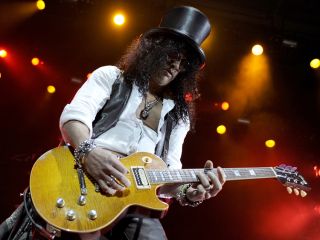 A live DVD and a new solo album are in store for Slash. But what about Velvet Revolver? (Image credit: Tim Mosenfelder/Corbis)

While the singer search for Velvet Revolver apparently continues, Slash is pushing forward, beginning work on his second solo disc.

On his Twitter account on 3 August, Slash posted this brief but very upbeat message: "Started 2nd round of pre-prod today. Its going to be a rockin' fn' record!"

While it is not known yet what musicians Slash plans on recording with, he has confirmed that touring vocalist Myles Kennedy will sing on all of the tracks. On Slash's first solo album, Kennedy sang on two cuts, with an array of guest vocalists appearing on a song each.

In other Slash news, the guitarist's recent 'homecoming' show on 24 July at the Victoria Hall in Stoke-on-Trent, England, where he was raised until he was five, was filmed for a DVD release, tentatively due in October.

"I've been wanting to do this for a long time and for some reason it just never seemed possible," Slash told Blabbermouth. "One of the things about doing the solo record and setting up my own tour was that I told the powers-that-be that I wanted to play in places I'd never played before. And so Stoke was something that was high on my list and I told them just make it happen."

Slash's setlist from his Stoke-on-Trent performance