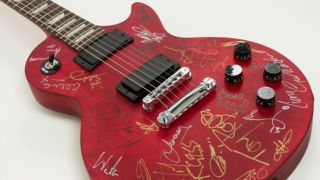 Liam Gallagher, James Dean Bradfield and many more have signed the LPJ

A Gibson LPJ signed by Liam Gallagher, James Dean Bradfield and many more is being auctioned off in memory of Charlatans' drummer Jon Brookes, with proceeds from the sale going to Brain Trust Charity.

The guitar was signed at the Jon Brookes Memorial Concert, which took place at the Royal Albert Hall in October. Brookes passed away in August following treatment for a brain tumour first diagnosed following an on-stage collapse in 2010.

The auction, which will be open until 16 Novemeber and is currently live on eBay, has already received bids of close to £4000.

The Brain Tumour Charity is the UK's leading charity dedicated to funding research into brain tumours and supporting those affected by the cancer.

To bid on the guitar visit the eBay listing. For more information and to make donations visit the official Brain Tumour Charity website.