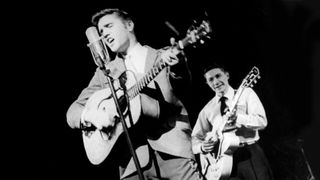 Matt Ross-Spang, engineer at Sun Studio, the legendary facility where Moore, Presley et al produced their groundbreaking early recordings, wrote on Instagram. "We lost one of the finest people I have ever met today. I was lucky to call you a friend and I'm very glad I got to see you just a few days ago.

"The guitarist that changed the world... especially mine; I hope you don't mind if I keep stealing your licks. Love you Scotty."

Winfield Scott Moore III was born in Tennessee on December 27, 1931 and began learning guitar as an eight year-old.

Moore, by now known as Scotty, played in jazz and country outfits before Sam Phillips, a local DJ and founder of the soon-to-be-legendary Sun Studios, teamed him up with local teenager Elvis Presley.

The hits started flowing in 1954 with That's All Right, and a red-hot streak of seminal rock and roll recordings quickly revolutionised popular music, first in the US, then the rest of the world.

Scotty parted company with Elvis in 1964 but was reunited with Presley and drummer Fontana for the legendary NBC '68 Comeback Special.

In his well deserved entry into our 50 greatest guitar tones, we said of his searing appearance on Hounddog: "Scotty's P-90-equipped Gibson L-5 and Ray Butts amp growl into life as the first solo starts down on the low notes.

"The bridge pickup is almost distorting, just on the verge of breaking up, and when the lick hits the top strings anyone with a spine can feel it tingle. Timeless!"