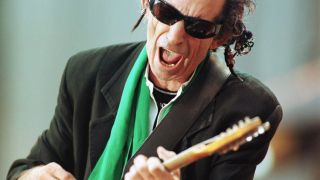 Keith will be back doing what he does best in November (Image credit: Colin McPherson/Sygma/Corbis)

The Rolling Stones are celebrating half a century as the greatest rock and roll band in the world with four nights doing what they do best - playing live.

The four dates which make up the 50 And Counting tour - 25 and 29 November at the O2 Arena Greenwich, 13 and 15 December at the Newark Prudential Center New Jersey - will mark the Stones' half century,with tickets for the London leg going on general sale this Friday 19 October.

The gigs will follow the release of epic fifty track greatest hits album GRRR!, out on 12 November. For more information on the album, and for ticket information for the gigs, visit the official Rolling Stones website (and brace yourself, tickets aren't coming cheap).