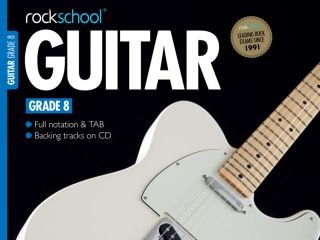 Tens of thousands of students every year take Rockschool exams and on the 1 May 2012, Rockschool launches the eagerly awaited new Syllabus for guitarists. Building on the global success of its current exams, Rockschool talked to students and teachers, listened to what they had to say and used their comments as a guide to develop the all-new fourth Syllabus.

This new Syllabus represents an accumulation of over twenty years experience in the design and delivery of graded examinations in popular music all around the world. The format of the new curriculum will be very familiar to students with a number of new features and refinements that will enhance the total learning experience.

Rockschool has recognised that performers often want to concentrate on a particular musical genre and the new Syllabus has been built to allow a high degree of flexibility in musical choice. All the supporting tests and exercises will support your musical skills enabling you to approach the performance pieces with confidence as well as providing many of the tools needed for improvisation. As you move through the grades, a greater degree of choice and specialism is available now, reflecting the realities of how musicians learn, perform and progress.

To recognise and support this choice of musical paths, Rockschool has commissioned bespoke pieces, from specialist writers that allow you to demonstrate your mastery of a particular style as you advance. In addition, great care has been taken in the recording of the grade pieces to ensure they are of album quality.

The services of eminent producer Nick Davis (Genesis, XTC, Deep Purple, Bjork) were employed at Farm Studios (Genesis' own studios). Nick's experience and pedigree helped achieve stylistic authenticity using top session musician's including horn sections and other instrumentation. The overall final result is commercial quality recordings that deliver the best production values and tracks to learn and play along to.

Rockschool has used top musicians to record the tracks and these include Charlie Griffiths, guitarist with Haken and also teacher at London based the Institute. Joining him is Stuart Ryan, regarded at one of the UK's finest guitarists and regular contributor to Guitar Techniques, Total Guitar and Guitarist. Other contributors include guitarist extraordinaire, Kit Morgan who has worked with Curved Air, Vanessa Mae and Ian Anderson, and head of guitar Syllabus development as well as long-term contributor, Deirdre Cartwright.

The new version four Syllabus represents a milestone in the development of Rockschool's graded exams making them more accessible, more appealing and more straightforward to learn. Looking forward, Rockschool can also announce they will be making the arrangements of the Debut, One, Two, Three, Six and Seven grade tunes available digitally in due course.

Rockschool is Europe's No. 1 Rock Music Exam Board and offers Graded Music Exams, Diplomas and Vocational Qualifications that are practical, flexible and fun. Founded in 1991 they run qualifications for thousands of musicians in the UK, Europe, Africa, Asia and Australasia. Rockschool has been independently and fully accredited by the UK government through Ofqual, DCELLS and CCEA since 2002. Their graded qualifications are also accredited by SQA Accreditation in Scotland. In 2010 all its qualifications were successfully re-accredited on the QCF. Further information about Rockschool's independent public accreditation is available here. In the UK Rockschool has over 500 exam centres and more than 4500 instrumental teachers registered.