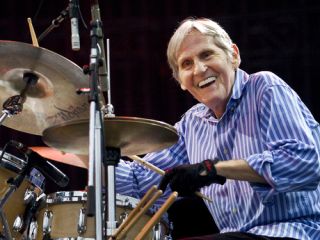 Yesterday, it was revealed that Levon Helm, the legendary drummer and co-vocalist for The Band, was in the "final stages" of his long battle with cancer. Today, Helm's two surviving Band mates, guitarist Robbie Robertson and keyboardist Garth Hudson, have issued statements about the one of the greatest players in rock 'n' roll history.

"Last week I was shocked and so saddened to hear that my old band mate, Levon, was in the final stages of his battle with cancer. It hit me really hard because I thought he had beaten throat cancer and had no idea that he was this ill. I spoke with his family and made arrangements to go and see him.

"On Sunday I went to New York and visited him in the hospital. I sat with Levon for a good while, and thought of the incredible and beautiful times we had together. It was heartwarming to be greeted by his lovely daughter Amy, whom I have known since she was born. Amy's mother, Libby Titus, and her husband, Donald Fagen, were so kind to help walk me through this terrible time of sadness. My thoughts and prayers are with his wife Sandy.

"Levon is one of the most extraordinary talented people I've ever known and very much like an older brother to me. I am so grateful I got to see him one last time and will miss him and love him forever.

"I am too sad for words right now. Please continue praying for Levon and family."