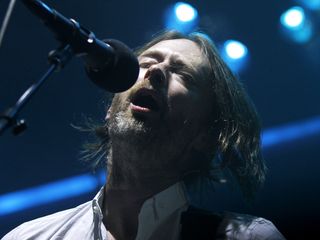 Is it just us, or is Thom Yorke starting to look like Eric Clapton? (Image credit: Jen Maler ./Retna Ltd./Corbis)

Radiohead will be releasing the songs The Daily Mail and Staircase on 19 December. The tracks were recorded during studio sessions for the band's latest album, The King Of Limbs, but weren't included on that disc..

A good many fans will already be familiar with the songs, as they were performed as part of their live From The Basement session in which they played The King Of Limbs in its entirety.

In the US, Radiohead played Staircase a couple of months back on Saturday Night While; they performed The Daily Mail that same week on a special hour-long segment of The Colbert Report.

The band is set to hole up in their Oxford studio this month and next to work on new material. Barring a quick album taking shape, it might be a while before we hear the fruits of these sessions: the group is set to embark on a world tour beginning in February. Click here for the dates that have been announced (more are to follow)..