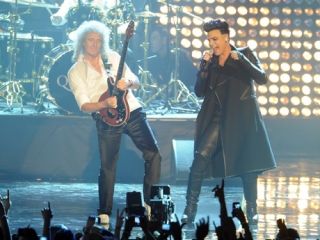 Following the cancellation of Sonisphere festival due to poor ticket sales, headliners-to-be Queen with Adam Lambert have announced two replacement dates at London's Hammersmith Apollo for 11 and 12 July.

The news comes barely two weeks after Sonisphere was canned and, reportedly, the band and management had been working hard ever since to find a replacement venue for the shows.

"Somehow this feels right," said Brian May. "The Odeon [the former name of the Hammersmith Apollo] is a big part of our history, and its atmosphere is second to none. It's the perfect place to acknowledge our faithful fans, and will be a fitting return to our roots!"

Tickets for the shows are set to go on sale on Wednesday 18 April at 9am via www.hmvapollo.com. According to the band's representatives, Sonisphere ticket-holders will be contacted via email and invited to purchase tickets in a 24 hour pre-sale, which will take place on Tuesday 17 April.