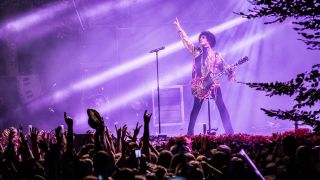 Singer, songwriter, producer, guitarist, drummer, keyboard player, movie star, band leader and peerless live performer. Prince, who has died at the age of 57, was all of these things and many others.

What's more, he wasn't just a jack of all trades. He mastered pretty much every musical discipline he turned his hand to - is it fair to call him the most highly-rated 'underrated guitarist' of all time? - and was an inspiration not only to his fans, but also to countless other artists who tried but, in most cases, failed to meet his almost impossibly high standards.

Electronic musicians wanted to sound like Prince (could anyone program a drum machine quite like he did?). Guitarists wanted to play like Prince. Hell, anyone who's ever made music would have killed for an ounce of his talent. There was a time when he was writing so many great songs that he could afford to give sure-fire hits away to other artists.

Yes, he could be infuriating. The lack of quality control, particularly on his later albums, was as amusing as it was alarming, but that was part of the deal. This was a man who lived and breathed his craft - "If I didn't make music, I'd die," he once said - and seemed utterly consumed by it.

If Prince had had his way, he'd have released far more than the 39 studio albums we're left with. Indeed, it was his desire to put out new material almost as quickly as he recorded it that lay at the heart of his dispute with his Warner Bros record label in the mid-'90s.

Before that, of course, he'd established himself as a bona fide rock/pop/soul/funk superstar. His early albums, particularly Dirty Mind and Controversy, more than hinted at his immense talent and, right from the start, he was writing, playing and producing every note.

1982's 1999 announced Prince as an artist who could sell records, but it was Purple Rain that took his career into the stratosphere. Both movie and album were huge hits, and the music - a delicious hybrid of pop, rock, soul and funk that he created with his band The Revolution - was laser-targeted towards the mainstream.

Prince refused to stick to the script, though. In just one of many contrary career moves (later, he would become an internet pioneer and then attempt to remove all traces of his digital footprint) he followed Purple Rain with the psychedelic and decidedly uncommercial Around The World In A Day, before heading back to the movies and directing and starring in Under The Cherry Moon. The film was a flop, but Parade, its soundtrack album, was a gem.

Then came what history will probably consider to be Prince's crowning achievement. 1987's double album Sign o' the Times (typically, Prince had actually wanted to release a triple LP) showcased a man at the peak of his powers. The title track certainly offered his greatest lyric, and if you haven't seen the companion concert movie, you really should.

This high watermark did nothing to stop the flow of Prince music. Sign o' the Times was quickly followed by Lovesexy, a Batman soundtrack, Graffiti Bridge (yet another movie/album project) and the popular Diamonds and Pearls, which is often cited as Prince's last great record.

Prince's purple period may have been followed by a patchier one, but The Gold Experience, from 1995, was never appreciated as much as it should have been, and there were moments to cherish on pretty much every release. What's more, Prince's skills as a live performer seemed to be ever more highly regarded as time went on. The only downside to going to one of his gigs was that everything else seemed to pale in comparison, and if you managed to catch one of his late night club shows, consider yourself very lucky.

Leaving a Prince show, you knew that you'd just witnessed something special, and that you wouldn't see his like again. At the same time, though, it felt like he would go on forever. He barely seemed to age, and his desire to perform appeared to be as strong as ever.

Tragically, though, it ends here. "All good things, they say, never last," Prince once sang. Sadly, we learned today that he was right.