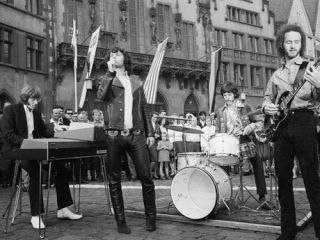 Although LA Woman was released in April of 1971, the surviving members of The Doors are taking a better-late-than-never attitude when it comes to celebrating its 40th anniversary - by marking the occasion in January 2012 with a two-disc reissue.

As one would expect, some rarely heard goodies will round out the set, which includes alternate versions of practically the entire 10-song album, along with a DVD/Blu-ray making-of documentary called Mr Mojo Risin': The Story Of LA Woman.

But the big draw to the package will surely be She Smells So Nice, a never-before-heard original that producer Bruce Botnick recently unearthed while listening back to tapes to prepare the reissue.

You can check out a 30-second snippet of the song below. With its strong blues feel, an upbeat but relaxed shuffle and an almost jam-like quality to Robby Krieger's guitar playing, She Smells So Nice is very much in the direction where The Doors were headed after 1970's gritty, un-popified Morrison Hotel.

Listen: The Doors - She Smells So Nice

The reissue of LA Woman in January 2012 will kick off what is being called "The Year Of The Doors."