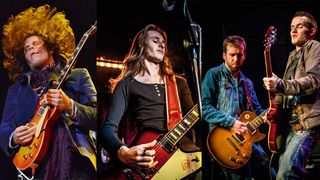 For many, the blues is defined by the legends that pioneered the form, but new generations of guitarists are taking on the mantle, evolving the genre and hitting the road, as part of the Planet Rock Roadstars Tour.

At the tail end of this year, Simo, Aaron Keylock and Federal Charm will co-headline a massive run of UK dates - we spoke to guitarists JD Simo, Aaron, Paul Bowe and Nick Bowden and got their thoughts on what drew them to the blues in the first place and who would make the cut for their dream triple-headline tour…

The Roadstars UK tour proves the future for blues rock is bright on both sides of the Atlantic, but what kind of fans have you noticed coming to your shows - is there a mix of ages?

Aaron Keylock: "Over the many shows we've been doing over the last year or so I've really noticed a variation in the crowd, I think because the music is timeless. I started listening to it when I was eight and going to shows at 10 with my parents.

"I've always thought it was really cool that the people who were there to see bands like Zeppelin and Humble Pie back in the day also come to your shows and say that they dig your music. At the same time, you've got these teenagers coming along and really getting into what you do - they may never of heard of all the blues greats but in a small way it's the same as the Stones did for that generation (and me), introducing so many people to Chuck Berry, Muddy Waters and Howlin' Wolf and all those guys which is what carries the music on and why it survives."

Paul Bowe, Federal Charm: "Generally, our demographic is 40-plus. But in recent times, particularly on our last UK tour, we saw a bunch of teens and 20s upwards. They'd heard [second album] Across The Divide and it appealed. Our outlook on blues-rock is to try and take it forward without forgetting the past. I suppose it's a tough one, but its helping to mix the age groups."

Nick Bowden, Federal Charm: "Yeah, there's definitely a good mix coming to the shows. We tend to find that you get a lot of the older generation who were around in the heyday of the blues explosion coming to check out the new guys on the scene. You also get the youngsters who've maybe just been turned on to it, some of them have been in to it for a long time, too. It's great to see!"

JD Simo, Simo: "Since January, we've played over 130 shows. All of the US, Canada and all over Europe. Through all of that we've seen mostly its 20-40 year-old guys with maybe 20 per cent girls. There's some younger and some older, but for us, it's usually predominately that."

What attracted you to the blues, and why do you think it's still vital for new generations?

Aaron: "I first started playing guitar when I was eight, and was already a huge fan of bands like AC/DC, Guns N' Roses, Led Zeppelin and the Stones. I remember when my guitar teacher showed me a 12-bar blues progression and sent me some songs from blues guys to check out. I just loved the sound and the soul in the music.

"By the time I was nine, I didn't listen to AC/DC or Gun N' Roses any more, because I was hooked on Muddy Waters and Hound Dog Taylor! It's still vital for new generations to get into it because it has influenced all the great rock bands and all popular guitar music that we hear today. There's loads of great young players out there really getting into it and understanding the music, and that's just great!"

Paul: "The soul and honesty to blues and blues musicians appealed to me. It obviously came via a passion for '60s and '70s rock growing up, and you soon begin to learn the history and inspirations. As a guitarist, I whittled it down to players like Freddie King and further along, Peter Green, then leading into Jimmy Page.

"I thinks it's important for blues and rock for future generations to continue to progress and be inspired by its history. Myself and Nick are a case in point. If it can grab you as a kid to pick up an instrument, learn your craft, put a band together and release records and tour, then it's done its job."

Nick: "Well, when I first started playing, I was into heavier stuff, like Metallica and the like. When I first heard Jimi doing Little Wing and Red House, that was a definite turning point for me in my playing. Then I got into Led Zeppelin, and the rest is history. It's vital for players of all ages to experience the blues and immerse themselves in it, I think - after all, it's how this rock 'n' roll thing started."

JD: "I was attracted to its rawness. Joe Ely once said it's the soul stripped of its jewellery. I think that's about right. At least what I like. For me, if it's primal and raw, which basically means honest and truthful, I'm all about it. It's never gone out of style, ya know?

What are the vital components of your tone, and why are they important to you?

Aaron: "I use a very simple setup, as I like music to be as real and organic and personal as possible. I don't use any pedals or wireless systems. I'm using a Marshall 1987X Plexi head through a 1936 2X12 cab with Greenbacks in. The guitars I'm using are a 2009 Gibson Standard Faded Les Paul, a 2013 Gibson Firebird V, and a custom Korina Junior built by a great company in Oxford called TSR Guitars. I've been using the Junior for slide for about a year now and it's perfect!"

Paul: "I was using Marshall JCM for ever. I was then given an Orange 50-watt Thunderverb to try out on our last album. I was being stubborn. But fell in love after minutes. I use the gain from the head, and I can keep the clean channel slightly dirty for softer songs and I alter the volume on the guitar throughout. I predominantly use a Honeyburst Les Paul 1960 Reissue. On the guitar, I always roll the tone of three points. It just adds a coffee-like finish. On the floor, it's simple. I use a Cry Baby, Boss DD-6, Electro-Harmonix phaser and Boss TU-2."

Nick: "My rig is as basic as it comes: a Strat going through a Marshall. I love the pure tone of the two combining, and as far as pedals, just a tuner and a footswitch."

JD: "The older I get, the more I realize that the vital component is you. Or it should be, I think. A true musician should be able to make anything sound good. I've got my old '62 Gibson 335 that I'll have along with some backups. Gibson is making a signature model of that guitar now, and I'll have a couple in case I break a string or something. I use an old wah and plug into an old '60s Fender Super Reverb and a '63 Epiphone Futura. I use the reverb and trem on both throughout a show. For acoustic stuff, I play a Waterloo WL-14 with an old '50s DeArmond soundhole pickup."

If you could choose any artists, alive or dead, who would you put together for your dream three-act blues tour?

Aaron: "I think I'd have to choose a young Buddy Guy, as it would be incredible to see him when he was such a powerful stage performer - he was electric! Almost for the same reason, I'd love to add Luther Allison to the bill. I remember when I first started to play shows, I learned a lot about performing blues and presenting emotion in a song from watching him. He was an incredible guitarist, singer and songwriter - he really had it all!

"Lastly, I'd love to see Howlin Wolf. I remember being nine years old and listening to Smokestack Lightning for the first time on YouTube... it scared the shit out of me!

Nick: For me, it would be SRV and Double Trouble, Cream and Peter Green's Fleetwood Mac. Don't ask me who would headline, though!