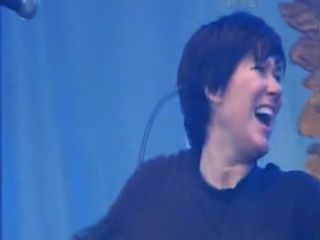 Don't call Pixies' performance yesterday at the Isle Of Wight festival a 'comeback' - OK, you can if you really want to - but one thing is clear from such a gig: this band is ready for the recording studio.

Fro the second the band hit the stage with U-Mass to their set-closer, the B-side Into The White (a reference to the Isle Of Wight), the Boston-based group who have infuenced everyone from Kurt Cobain to Dhani Harrison, held the crowd in the palms of their most capable hands.

And the band clearly enjoyed every moment of their 80-minute stand. Check out the video of Debaser that we posted on MusicRadar's Twitter page - Kim Deal can hardly stop laughing and smiling. Good to see.

Here's another highlight, a smashing rendition of their classic Monkey Gone To Heaven. Can you say, 'perfection'?

On the subject of recording, in 2008, singer-guitarist Frank Black said attempts at tracking new Pixies material weren't going according to plan:

"It's just a waiting game right now. Whatever we do in the future is gonna have to be fresh. I have to see if the band as a whole wants to go into the recording studio for a new record. That makes sense on some level. For us, there's gotta be an angle. It can't be just playing our old songs over and over."

And while we play the same waiting game, the band is issuing Minotaur, a gargantuan box set that rounds up the band's studio recordings and videos with a live DVD.

Plus, there's bells and whistles and more goodies than you can shake a stick at.The set is available for presale now. For a looksee and more information, visit Artist In Residence.