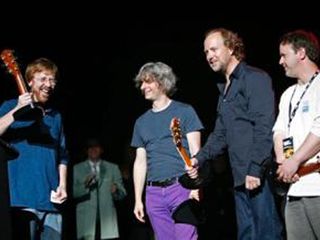 Unfortunately, no jamming at The Jammys

Though the Jammy Awards were able to bring together the members of Phish for the first time since they broke up four years ago, the reunion wasn't everything Phish-heads had hoped for.

While all members of the beloved jam-band appeared - and two of them grooved onstage (Trey Anastasio and Page McDonnell) - they didn't perform together Wednesday night. And as they accepted their Lifetime Achievement Award, there was no hint of another reunion, dashing rumbling hopes that Phish might become the latest act to get back together for a blockbuster tour.

But the coming together of Anastasio, McDonnell, Jon Fishman and Mike Gordon was still the highlight of an emotional and electric evening, as they thanked fans for their groundbreaking journey as the most popular jam-band since the Grateful Dead and one of the most popular touring bands in rock.

"I always wanted to somehow have a moment when I could convey to some degree what all of this meant to me and I know to the other guys, too," Anastasio said to the crowd at New Yorks Theater at Madison Square Garden. "I feel like as a musician we're servants, and musicians from the beginning of time have been there to express the mood and the musical feelings in the air for whatever's going on in that particular culture. It's the greatest joy as a musician to be able to translate that, be part of something and watch the scenery around you. That's what it felt like to be in Phish all those years."

The four Phish men haven't been onstage together since their last performance in Coventry, Vermont., in 2004, which wrapped up a farewell tour and a 20-year run for the band. Since then, each has been working on individual projects.

The foursome embraced each other warmly as they received their trophy, one of two for the evening (they also won Best Download for a years-old recording released last year for charity). Gordon told the audience he'd been sick earlier in the day and had considered not coming, but said he rallied for "my deepest brothers ever."

Later in the evening, Anastasio transfixed the crowd as he performed The Beatles's While My Guitar Gently Weeps and Everyone Has Something To Hide Except For Me And My Monkey with the popular Beatles' tribute band, The Fab Faux.