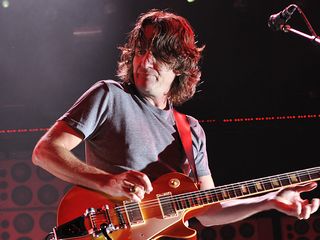 Total Guitar issue 331 features an Access All Areas review of Pearl Jam's Manchester show on 21 June and an exclusive interview with Stone Gossard on his other band Brad along with his work with Pearl Jam, Temple Of The Dog, Mother Love Bone and Green River.

During the discussion, we asked the Pearl Jam guitarist about the band's habit of changing their setlist every night.

It's incredible that you change the setlist so much every night - what's the reality of that? When will the setlist be planned in relation to when you step onstage?

"Well yesterday we got it about an hour and 15 minutes ahead of time. We hadn't played Black, Alive, Jeremy or Small Town in soundcheck or rehearsal in nine months. Because when we rehearse we're always kind of rehearsing the odds and ends that we don't really know that well. So we're always kind of assuming we know the main meat of the set.

"But having said that, not having played something for a long time and you're thinking, 'I know it, I know it' then you can get up to that bridge and it's, 'What the f**k is that part?' You can be up there with your pants down. Luckily, last night, it all worked out - nothing too dramatic."

Do you and Mike take time to sit down together and go over new additions?

"Yes we have a 20 minute sessions backstage when we look at the setlist and say, 'Let's do that one again' and we have a stereo system that has all the Pearl Jam songs on it so we'll play along with that. But it's huge because when we first started out I would have probably been one of those people that thought, 'Let's just go out and play the hits - why play anything other?'

"But I think the band, particularly Jeff but I think Ed too, and ultimately me to some degree, as you get more songs we consistently work them in. Even the ones that didn't work so well. It's given us so much more room because our fans now expect nothing less than to have something very different each night.

"So even if you f**k something up, the fact that you're trying songs you haven't played before… we rehearsed a song at soundcheck today that we've never played [live], before [that turned out to be Hitchhiker]. It's kind of odd to have 130 odd songs and people are clambering and if we play it people will be on the internet [looking for them]…"

"It's a good thing to be able to have that challenge."

For much more from Stone Gossard, check out Total Guitar magazine issue 331, on sale 6 August.