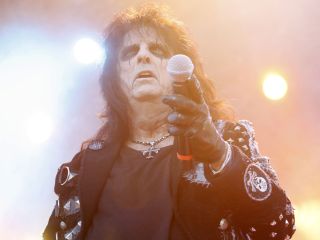 The original Alice Cooper line-up will be 'reunited' on stage as holograms for a one-off London gig.

The Alice Cooper band, who haven't appeared as their original line-up in the UK since 1972, will be playing at Battersea Power Station on May 11.

The band are playing as part of the Jägermeister Ice Cold Event which is set to make history as the UK's first holographic '4D' rock gig and will celebrate the release of the new Alice Cooper box set Old School: 1964-1974.

"We couldn't resist this", said Alice. "Working with Jägermeister to appear as holograms on the other side of the Atlantic is the ultimate experience, a cutting-edge conjuring trick that celebrates the future and our history. We can't wait to see the results."

There are 800 exclusive tickets available to the Jägermeister Ice Cold Event, which can be won by applying via the new Jägermeister UK Facebook page.